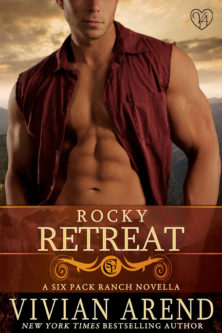 Things were getting interesting when the door behind him jerked open. “Move it to a room, or I’ll post this on YouTube as family outings gone bad.”

Lee’s cousin Jesse stood in the doorway, leering at them.

Lee didn’t say a word, just stepped out, bumping Jesse hard enough to send the other man staggering backward in the snow. Lee’s full attention remained on Rachel as he held his hand to her. “Want to come in while I grab my things?”

Jesse followed them inside. “When you come to the party tonight, make sure you bring—”

His cousin made a face before he glanced at Rachel and rolled his eyes. “Oh, right. Sure, no problem.”

Jesse stomped off to the back of the house, leaving Rachel feeling as if she’d missed a vital part of the conversation. “Was there somewhere else you’re supposed to be tonight?” she asked.

The fridge was open, and Lee was setting things on the counter, including a tray covered with tinfoil that released the most amazing barbeque scent into the room. “There’s nowhere I’m supposed to be tonight except with you, but Jesse got this idea and he refuses to let it drop. That’s his problem, not ours.”

Rachel glanced toward the doorway as Jesse paced past, the flash of annoyance in his eyes clearly directed at her. “Yeah, he does seem to have a few issues,” she snapped, hoping he’d overheard. “Sounds as if he’s not quite sure how to do the behave in public thing yet.”

The front door slammed, and Rachel sighed. “I didn’t mean to come between you and your family,” she apologized.

She expected him to say something like never mind or it doesn’t matter, but instead, Lee put down the box he’d already lifted and turned to give her his full attention. “You’re not coming between me and my family. Jesse’s had a stick up his ass for a while, but it’s not my job to make him happy, and it’s not your job either. I told him I wasn’t going to the party, and he can’t blackmail me into going just so he’ll be in a better mood.”

She leaned into the hand he’d cupped her cheek with. “You’re pretty smart.”

Amusement flashed in his eyes. “Pretty smart for a young guy, right?”