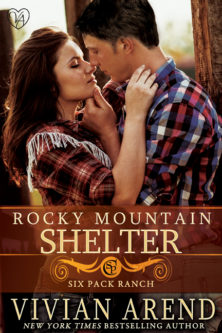 Innocence and passion are an addictive mix…

The dark-haired stranger next door triggers every protective instinct Trevor Coleman never knew he had. From the moment Becky Hall literally falls into his arms, the last man standing of the Moonshine clan doesn’t even attempt to resist sweet temptation. Becky is beautiful, mysterious and heartbreakingly vulnerable…and he’s a goner.

To escape the hell she was trapped in, Becky left everything behind but her courage. And for once in her life, good people step up to make a difference. A helping hand, a new job…a very attentive and libido–stroking neighbour. Now a new future awaits, one that shockingly includes sexual pleasure instead of icy pain, and a sexy cowboy who’s more than eager to show her the ropes.

Becky’s sweet smiles and seductive innocence draw him in like nectar, and Trevor knows one taste will never be enough. But with secrets thicker than a bumper crop, changing a life will take more than a new ID and a cowboy’s good intentions.

Warning: boy meets girl, boy falls in love with girl—all hell breaks loose. We’ve got a hero whose hands are tied in more ways than one. A heroine who wants to experience everything she’s ever missed, and a family that needs to discover if its roots go deep enough to weather any storm.

Trevor lingered over his drink. He’d struck out for the past couple of months, but Becky moving in changed things. Maybe he’d be able to finally get ahead. “There’s someone new renting it now,” he said. “The house on the southwest quarter.”

Jesse raised a brow. “What? The old-timers are gone?” He snapped his fingers. “Hey, you’re right. I heard somebody say they decided it was too much work to take care of, so they moved into town. That was back a month or so ago.”

“Well, someone else moved in already, so I might be able to find out who owns it from her.”

Jesse’s eyes widened. “Her? Tell me we’ve got new blood in the neighbourhood.”

Something tightened in Trevor’s gut. He had absolutely no reason to feel possessive, or protective, but damn if that wasn’t what whipped through his veins the instant interest lit up Jesse’s expression. “Yeah. Must be an old schoolteacher come to retire, or something,” he lied.

Anticipation faded from Jesse’s blue eyes. “Well, damn it all.” He threw his beer bottle across the deck into the open garbage can, the glass ringing loudly off the metal frame. “I swear Rocky is where people come to die. Makes it difficult to find anybody to spend time with.”

The utter dejection in his cousin’s voice made Trevor laugh out loud. “What makes it difficult is the fact you’ve already dated all the women in the area and pissed off most of them, in this county and the next three over.”

Jesse held his hands up in surrender, flashing a grin. “I can’t help it if I’m too much for any one woman to handle.”

Rafe made a gagging noise from the doorway. “If anyone has any appetite left after that load of crap got delivered, get your asses in here and help. Trevor, I take it you’re staying for supper?”

Trevor had his own place down the road, but he liked company too much to spend his evenings alone. “I’ll cook the vegetables and save your taste buds from Jesse’s slam-bam-thank-you-ma’am cooking methods.”

Jesse snorted as he rose to join them in the kitchen. “You two have no idea what culinary marvels I’m capable of. I keep my talent on the down-low, kind of like Superman in the kitchen.”

“No argument here—you’ve got a stomach of steel. We’re far too redneck for your class of cooking.” Rafe shoved a dirty plate into Jesse’s hands. “That’s why you get to wash. And get a move on, ’cause there’s nothing to eat off.”