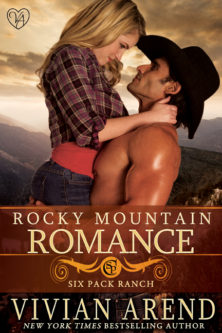 “I’m looking for trouble, and I know you’re the man to help me find her.” It was the familiar voice of his cousin Jesse.

This could be a good distraction from the fucked-up change of plans. Maybe. “I don’t know if I want any of your brand of trouble,” Steve warned.

Jesse snickered. “We could do this all night. Or you could get your ass over here so I can show you what I’ve got.”

“What? You’re actually at home? I thought you’d decided to turn into a hobo and live out of your truck.”

“Screw you.” Only the words were said without any heat. It appeared the enthusiastic smartass version of Jesse was back—the guy everyone enjoyed spending time with. “Come on, Steve, I can’t keep this under wraps for much longer.”

His curiosity shot skyward. Steve turned his truck reluctantly away from Melody and down the back roads.

On the low porch outside the rental house, Jesse, Trevor and Lee were gathered in a tight knot, their broad backs blocking the view of whatever the hell had Jesse in an uproar. He ordered Prince to stay, his dog settling back on its haunches by the truck, peering toward the house with interest.

Steve made his way forward, jerking to a stop at a low growl that rang out as the first step creaked under his foot.

Trevor and Lee chuckled as Steve pushed himself between their shoulders to check out the center of attention. On the ground before them lay a sleek German shepherd with four large pups nestled against her nursing.

“Seriously?” Steve didn’t know if he should laugh or smack Jesse one. “You called me over because you want to show me a dog?”

His cousin squatted and ran a hand over the bitch’s head. “Isn’t she a beauty?”

Steve glanced at Trevor and didn’t bother to hide his amusement. “She’s gorgeous. So, where did you meet your new girlfriend?”

Jesse multitasked wonderfully, continuing to pet the dog while he gave Steve the bird. “Consider it my good deed for the day. I’m thinking about keeping one of the pups. If any of the rest of you want one, the bitch is supposed to be a prize-winning tender.”