Writer's World- tools. Use as needed.

I promised I’d talk about the writing process every now and then, and this week I have an interesting story to share.

There are many many ways to get from “It was a dark and stormy night…” to “The End”, and one of the key components of maintaining sanity is to realize that what works great for one writer sucks as a method for another. There is no one true path in writing.

And the longer I do this for, the more I also see there are no absolutes. There are some tried and true methods that I’ve heard authors swear by that totally and completely do not fit with my personality and writing style, and I would have bet it all that I would never ever touch that method with a ten foot pole. This past week? I used one, and it’s saved my mind.

Where do I begin to add to a book that people praised the pacing? There are no easy gaps to fill.

I read through it and took notes, getting a little distracted along the way by the hot smexing (heheh). I broke the book into parts in my head…before the picnic, before Thanksgiving, before the big reveal… I counted how many scenes were done in the hero/heroine’s POV. Still nothing. I know a couple scenes I want to add, but they have to make sense and flow, not just get tacked on willynilly.

And that’s when it happened. I broke out the index cards. 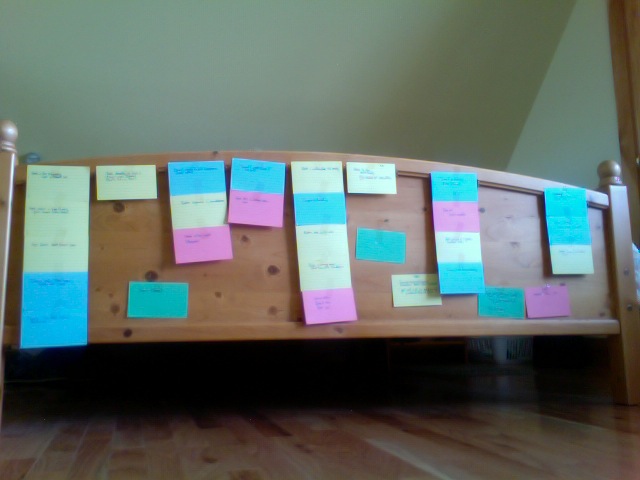 To a committed plotser like myself, this is like willingly taking hemlock. I don’t organize my stories, I don’t fill in charts with character qualities. Heck, I usually have to go back through the story after it’s written to find out what colour eye the characters have. But I was desperate, and impulse told me to try this, so I did. And damn if my instincts weren’t right again.

I went through the book and every scene got a card. For fun–because even work has got to be fun–I used yellow for Beth’s POV, blue for Daniel’s, red for the hotter scenes. Then I grabbed some tape and any scenes that HAD to go back to back? Taped them together. Stuck them on the foot board and suddenly…I could at least see where additions to the story wouldn’t be interrupting the flow.

In fact, looking at what finished the end of one chain, and what started the next chain let me see what kind of scene I could add in between that would actually enhance the flow. There was some crazy happy dancing the moment I spotted that. And then, I started adding cards. The loose cards taped the headboard are ideas for new scenes. In the end there are at least eight scenes I taped up there and as I’ve been writing this week I can feel the story gelling together beautifully.

Will I ever use index cards after this? Not sure. I’m not about to start story boarding and taping up cards the walls from day one, but I will never say never again. Because when something works, it’s like experiencing a little bit of magic. I don’t want to miss those a ha moments. They’re so much fun!

Nowadays there is lot of unforeseen circumstance which force men to take remedies. You can order medicines directly your office. In these latter days the stock you can find in online pharmacy is actually high. Some medications are as a rule used to treat many types of bacteria, such as tonsillitis and infections of the throat. Other ones are used to treat diabetes. Cialis is a remedy used to treat divers afflictions. What do you have to know about cialis order online? Presently many families search for the exact keyword ordering cialis online on the Internet. Perhaps you already read something about it. Having erectile disfunction can beyond doubt complicate romance. What can cause erectile dysfunction? A row of psychological issues can produce erectile dysfunction. What should you discuss with a physician before taking Cialis? Any medication may cause dangerous side effects. Sometimes side effects can be actually dangerous. Talk to your pharmacist about the proper disposal of your remedy.

Hi Vivian. I really like this post. I, a die hard pantser, bought index cards yesterday. Yes, it’s true. I need to add a couple of scenes to a 100K+ novel, and I’m not sure where they best fit, so I’m going to be trying index cards for the first time. You’ve given me hope that I won’t go mad with this little project.

Keep up the hawt writing! (And congrats on the EPIC…just a little late.) 🙂

Thanks for stopping in! And yes, I think it’s a lot to do with this being a longer book. I simply can’t imagine keeping 100K organized without visuals. Good luck!

And also thanks for the congrats–I didn’t really mention the win very much since the book was off the market by the time they announced it. I’ll be bringing out the award around release time though… 😉

I love finding out about the process. Thanks for sharing.

Love those “a ha!” moments 🙂 And sometimes I forget the power of simple things like index cards, even though I have plenty lying around. Glad you found something that worked! Sounds like this would be a tough project, but that you’re having fun with it. 😀

The cards made a huge difference. The projectis in with my editor now, so we’ll see what she thinks!

And I try to always have fun. 😉