Hmm, stories set in the workplace. This gets tougher when you have characters who live/work outdoors. Well, maybe not. This is a worksite excerpt–the company TJ works for is his brother Keil’s Maximum Exposure, based out of Haines, Alaska. They’re leading a hike up the side of King’s Throne mountain in Klaune National Park. From WOLF TRACKS: 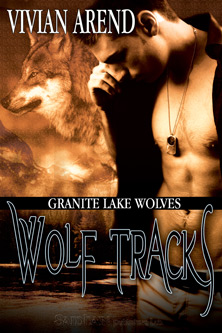 Score one for the underdog…er…wolf.

TJ Lynus is a legend in Granite Lake, both for his easygoing demeanor—and his clumsiness. His carefree acceptance of his lot vanishes, though, when his position as best man brings him face to face with someone he didn’t expect. His mate. His very human mate. Suddenly, one thing is crystal clear: if he intends to claim her, his usual laid-back attitude isn’t going to cut it.

After fulfilling her maid-of-honor duties, Pam Quinn has just enough time for a Yukon wilderness trip before returning south. The instant attraction between her and TJ tempts her to indulge in some Northern Delight, but when he drops the F-bomb—“forever”—she has second thoughts. In her world, true love is a fairytale that seldom, if ever, comes true.

Okay, so maybe staging a kidnapping wasn’t TJ’s best idea, but at least Pam has the good humor to agree to his deal. He’ll give her all the northern exposure she can stand—and she won’t break his kneecaps.

Now to convince her that fairytales can remake her world—and that forever is worth fighting for.

The panoramic views when they reached the top were staggeringly beautiful. Pam wandered aimlessly and clicked picture after picture. Tufts of clouds clinging to the mountaintops. A ribbon of glacier ice trailing off into the distance. The sun reflecting in a million dazzling light spots on the surface of Kathleen Lake.

Every time she glanced up she found TJ’s gaze fixed on her.

“Don’t you have anyone else you need to take care of?”

He shook his head slowly. “I set up the picnic already, and everyone else is eating. I had to make sure you didn’t stroll too close to the edge of the mountain or anything.”

Oh dear, it was hot up here, under the blazing heat of his stare.

“If there’s a picnic, I guess I should go join them.”

They sat together, TJ pointing in various directions and naming the local mountaintops visible from their vantage point. Pam nibbled on her sandwich, all the while trying to think of a good excuse to bring up the aborted kiss from the other night. As in, maybe they should find a way and means to try it again.

She’d never been so attracted to a man and so tongue-tied. There didn’t seem to be any appropriate openings, and she wasn’t about to simply jump him.

“So, I was thinking.” TJ passed her a juice box, condensation beading its surface.

“Dangerous thing to do.”

He grinned. “I’d like to make it up to you, I mean, leaving you in the lurch the other day. I kinda hoped you would forgive me enough to accept a little peace offering.”

Hmmm, bribery totally worked. “Like extra chocolate bars? Dark? I’d be willing to forgive just about anything for chocolate.”

His laugh rolled over her as he grabbed his daypack.

“That’s not the surprise, but I think I can still help you out.” He dug out a Ziploc bag and reached in for an extra-large foil-wrapped bar. “Oops, it’s too warm today to be hauling chocolate. Sorry.”

He pulled one out. Chocolate oozed from the edges and ran down his fingers. Hello opportunity. She grabbed his hand.

She brought his hand to her mouth and sucked one digit in, licking the warm melted gooeyness clean before moving to the next one. His breathing sped up and her pussy grew wet. Okay, she was over being mad and there had better be private rooms available wherever they were staying tonight.

By the time she removed all traces of chocolate, she could barely breathe. He leaned toward her, his dark eyes fixing her in place as their lips touched.

Bells rang. Cool, they weren’t even kissing and she heard bells.

More authors taking you out to work for the day…

Nowadays there is lot of unforeseen circumstance which force people to take remedies. You can order medicines directly your office. In these latter days the stock you can find in online pharmacy is actually high. Some medications are as a rule used to treat many types of bacteria, such as tonsillitis and infections of the throat. Other ones are used to treat diabetes. Cialis is a remedy used to treat divers afflictions. What do you have to know about cialis order online? Presently many families search for the exact keyword ordering cialis online on the Internet. Perhaps you already read something about it. Having erectile malfunction can beyond doubt complicate romance. What can cause erectile disfunction? A row of psychological issues can produce erectile disfunction. What should you discuss with a physician before taking Cialis? Any medication may cause dangerous side effects. Sometimes side effects can be actually dangerous. Talk to your pharmacist about the proper disposal of your drug.