We’ve got a couple of red-hot seniors finding a well-deserved happily-ever-after.

Tons of adorable family time. Some laughter, some tears.

Come settle in for a good, long visit with your friends.

Here’s a peek into Blake and Jaxi’s morning…

Curled up against him, Jaxi pressed her lips against the side of his neck, easing her legs on either side of his. A throaty moan escaped her, and Blake wanted to both laugh and curse as he realized his hand no longer rested innocently on her hip. Nope. He’d full on cupped her ass and was even now in the process of dragging her on top of his body.

“Maaaaama.” The doorknob rattled as PJ’s voice rang against the door. “Daaaaaadeeeee.”

Absolutely adorable even as their four-year-old’s timing made Blake groan. “Invasion?” he asked Jaxi.

She pressed a quick kiss to his lips before carefully crawling off. “I’ll get him. You deal with—things.”

With a slightly wicked pat of her hand against his belly, Jaxi swung away before he could grab her, hips wiggling saucily as she headed toward the door.

Blake rolled, adjusting his hard-on to a more comfortable position that was slightly protected in case their oldest son decided to jet propel his way onto the mattress like he usually did.

“Yes? We didn’t order any pizza,” Jaxi said as she knelt beside the door.

Around her, PJ’s expression went utterly serious as he shook his head. “Not peeza. Cuddles.”

“Well, that’s totally different.” Jaxi scooped him up, closing the door and returning to the bed. “Look, Daddy, we have an early morning delivery of cuddles.”

“One of my favourite things,” Blake said sincerely, opening his arms.

PJ snuggled in, and Blake felt that pulse deep inside again. The one that made him ache even as it brought a smile to his face.

Jaxi sat on the edge of the bed, her expression filled with wonder. “I love you.”

She said the words so simply, but it was clear the message was meant for him, not their son. Although she totally loved their kids to pieces, this thing between them wasn’t getting any smaller. After eight years of marriage it seemed to simply grow, expanding to fill every single bit of room, not just in Blake’s heart, but in their home.

Even as he draped an arm around their son, he patted the mattress beside him. “Climb in. It’s cold out there.”

She smiled wryly. “I will. But I figured I’d wait to let the rest of them in first.”

He shouldn’t have bothered asking. He knew the answer.

“Daddy?” A chorus of little girls.

Jaxi blew him a kiss before sneaking from the room. By the time she got back with two-year-old Justin in her arms, the seven-year-old blonde-haired twins, Rebecca and Rachel, had settled on either side of six-year-old Lana.

“Not a sleepover when it’s Mommy and Daddy’s bed…” Becca explained seriously.

“Shove over there, kids,” Jaxi said with amusement. “Make room for your brother.”

Shockingly, ten minutes later the bed was silent. The girls had curled up in a heap like puppies and fallen back asleep almost immediately. Against Blake’s chest, PJ’s blondish hair spread in a tangled mess. He’d snuck his thumb in his mouth, his little chest moving easily.

Justin was sprawled on top of Jaxi, contented baby snores rising from him.

And Blake and Jaxi, teetering on the opposite edges of the mattress. 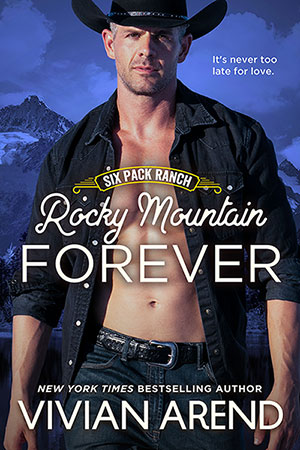