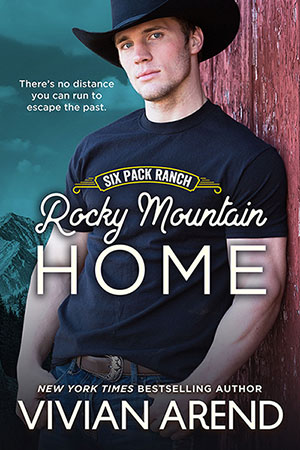 The place was not much more than three stools at a high counter, a couple of tables with hard wooden chairs and a dartboard on the wall. A large-screen TV hung over the bar, a hockey game in progress, but Jesse’s attention shot straight to the redhead at the counter, glasses lined up in front of her as if she was settling in for a long, intense bout of drinking.

The wind caught the bar door, slamming it shut behind him, and all eyes turned in Jesse’s direction. Two old-timers nursing drinks in the corner. The bartender behind the counter.

The woman’s gaze brushed him, lingering on the bruise beside his eye before slipping down his body then back up, her lips twisting into a smile. He offered one in return.

Buxom redheads were his favourite.

Her hair was braided back, the long length of it pulled forward to rest over her plaid-covered breast. Tight faded jeans, working leather belt. Light brown leather half-boots that looked worn and comfy.

She must have felt his gaze lingering because she glanced up to offer him a glimpse into grey-green eyes, a smattering of freckles over her nose and cheeks. Then she ignored him, motioning at the bartender as he brought forward yet another glass.

Jesse was intrigued. He made his way next to her. “Looks like a party in the making. Want a little company?”

“Knock yourself out,” she offered.

He settled onto the barstool and waved at the bartender. “I’ll have what she’s having.”

The grey-haired man stepped forward and held out a hand. “Then you’ll be giving me your car keys.”

Sounded as if some serious drinking was about to happen. Fine by him.

Bartender didn’t move. “That decreases your chances of freezing in a snow bank, but I still want your keys. You can pick them up at the front desk in the morning.”

Whatever. He tossed them over before leaning closer to the redhead to offer his hand. “Jesse.”

“Dare.” She shook his hand, her grip strong, and her palms rough enough to prove she wasn’t wearing the cowboy gear as a costume.

Dare took a sip from the lone glass of water in front of her, amusement rising. “You look the type who likes a lot of things about women.”

Jesse shrugged. “What can I say? I’m a happy guy.”

This time she looked him over for longer, her gaze lingering on what was soon to be a spectacular blue-purple bruise by his eye. “You like getting in fights?”

“Sometimes, but this?” He stroked a finger down the side of his face. “Farewell present from my cousin. Disagreement.”

She met his gaze. Judging. Weighing him. “Oh. That thing guys do.”

“Express our opinions with our fists? Yeah. It’s a pretty natural form of communication for most men.”

Her gaze dropped and she stared at his lips. “You fighting over a woman?”

He honestly didn’t know how to answer that. “Not a fight, but there was definitely a woman involved.”

She snorted. “I bet. There’s always a woman involved.”

Jesse took the opportunity to admire her in more detail. Her hair shone in the lights above the bar, the deep auburn highlights flashing as she moved. A slight indent showed on the crown where she’d been wearing a cowboy hat, and his interest grew even stronger. “So, Dare, why’re we having a party?”

“It’s a wake,” she corrected him. “Ten years they’ve been gone, and five since I started the tradition. But you don’t need the details.”

“Whatever you say.” He eyed the drinks lining up in front of them. “I’m not going anywhere tonight.”

He might have been curious, but he didn’t need to know what she was commemorating. He knew what he was saying goodbye to, and he could finish most of the alcohol on the shelf without putting a dent in his pain.

Jesse lifted the first glass of amber liquid, three full fingers in the tumbler. Raised it in a salute to Dare. “Here’s to forgetting everything except the pretty lady by my side.”

Her lips curled at the corners, but she touched glasses with him before tipping the drink back and finishing it in a few swallows. Her throat moved smoothly, and he stared, mesmerized, until she lowered the glass to the counter with a solid crash.

She wiped her mouth with the back of her hand before pointing at his glass. “You drinking or watching?”

The whiskey was smooth—far too smooth to be tossed back like a dirty shot. He took a little more time and let the liquid linger on his tongue, looking her over with appreciation. “We’re not going anywhere tonight,” he pointed out. “There’s no need to rush.”

Dare nodded once. “I usually do this by myself. I forgot there’s conventions involved with social drinking.” She picked up the second glass. “To the guy who reminded me it’s okay to slow down and taste the whiskey.”

Another toast. Another touch of their glasses together. This time she rolled the liquid over her tongue before she swallowed, eyes closing as she lifted the glass in an additional silent, internal toast.

As for Jesse, this one was for his twin brother, Joel. His other half—although that hadn’t been true for a good long while. Their separation, his own damn fault.

He finished the drink and lowered the glass to the counter a little harder than he should have, the bartender keeping a careful eye on them.

Two more whiskeys sat on the counter. Dare motioned toward them. “I’ll pay. I like the company so far, and it’ll be no fun if you have to stop before we’re finished.”

“I have no problems lasting. I’ll take you to the finish line.”

When she smiled, her eyes lit up, a dimple denting her right cheek. By the time they’d finished their third glass of whiskey, Jesse was tempted to lean over to take a taste of her.

“Your local bar?” he asked.

“Hell, no.” She stared into her glass. “I tried drinking too close to home the first year, and my brothers showed up. Where’s the fun in that?”

Jesse took note of the information. She had family somewhere. “Good to know you’ve got someone looking after you.”

She raised a brow. “Do I look as if I need a babysitter, sweetheart? Last time I checked I was a big girl. I can make my own damn mistakes.”

He rested his arm along the back of her chair as they tipped the next drink, the liquid tingling against his throat and gums as he took the hit. Dare turned toward him, half laughing, her eyes bright as she met his gaze, and for a second Jesse couldn’t breathe.

Right then he could have sworn he was twelve feet tall and invincible.