Look what’s up for pre-order!

Yes, it’s time to return to the Granite Lake world. You ready for some mischief? If you’ve enjoyed the previous wolfie books, I hope you’ll help me get the word out that there’s a new adventure on the way! 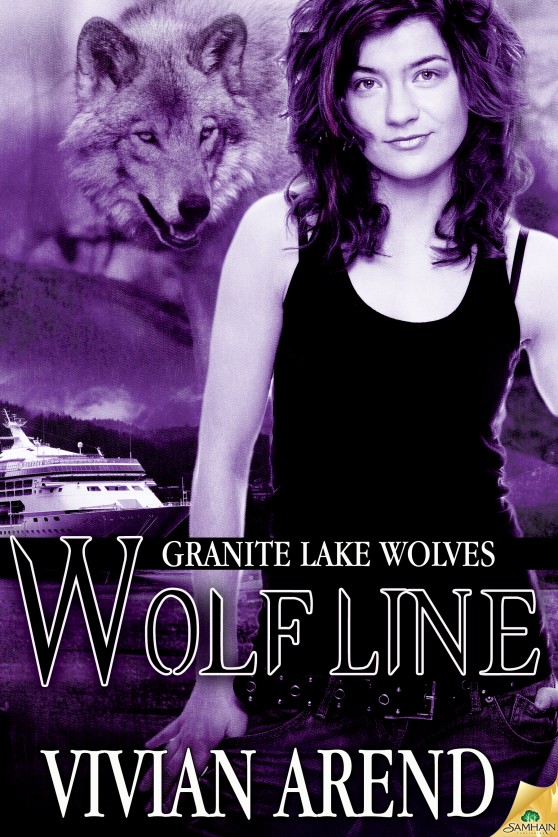 Into the best-laid plans a little chaos must fall…

Jared’s not sure how his quiet morning coffee near the harbour ended with him on a cruise ship impersonating one of his pack mates. Well, it might have something to do with a woman, but who can blame him? The female of the species was made to love, and he’s more than willing to share his considerable skills in that area. Especially since he figures the chances of meeting his own one-and-only are slim.

Keri Smith is positive the last-minute recruit sneaking aboard the Arctic Wolf Cruise Lines tour is her mate. Ix-nay on confirming that, though, at least for the next ten days. She’s promised her best friend to be overall troubleshooter for the shifter-only cruise. Getting tangled up in mating lust would reduce her skills to nil. Avoidance of the sexy wolf for the duration of the cruise, followed by jumping his bones, seems the logical solution.

But when libidos are on the line, “logic” and “wolves” don’t go together. Throw in suspicions of wrongdoing, and these two virtual strangers will need a lot more than luck to find their way through to forever.

Warning: Really? You need to be warned about the hot nookie and sarcasm? Yeah, it’s in here. Also colourful cat shifters, lupine royalty, and wild adventures in cabins like you’ve never seen before.

Nowadays there is lot of unforeseen circumstance which force men to take remedies. You can order medicines directly your office. In these latter days the stock you can find in online pharmacy is actually high. Some medications are as a rule used to treat many types of bacteria, such as tonsillitis and infections of the throat. Other ones are used to treat diabetes. Cialis is a remedy used to treat divers afflictions. What do you have to know about cialis order online? Presently many families search for the exact keyword ordering cialis online on the Internet. Perhaps you already read something about it. Having erectile dysfunction can beyond doubt complicate romance. What can cause erectile disfunction? A row of psychological issues can produce erectile dysfunction. What should you discuss with a physician before taking Cialis? Any treatment may cause dangerous side effects. Sometimes side effects can be actually dangerous. Talk to your pharmacist about the proper disposal of your drug.

I CANNOT wait! I love the cover and the story is going to rock. I’ve been holding myself back on doing a reread of the series because I have such a freaking huge TBR list, but now I’m feeling the urge:)

I confess when I was doing edits -I- ended up reading the entire series.

I don’t know if I can wait till June! I love the Wolfies and can’t wait to read this.

I’m trying to decide how to describe Wolf Line– it’s a little more humourous than the previous? Just the nature of the story I guess–because Jared is just so…Jared.

Can not WAIT!!
I don’t know how many times iv read them, iv lost count an same goes for a couple of my friends Xx

I think the fact they are novellas encourages re-reads–you can enjoy the entire story in a small time frame.

I have been taking teasing lessons from Vivian-can I just say y’all will absolutely love this one. *sigh* I say that as a totally devoted Granite Lake fan (one that got a sneak peek at this one) and *gasp* I think I like it more than TJ’s story-well, at least as much, maybe a bit more.

And I just noticed that the blurb doesn’t tell Jared’s last name, which is a shame, because you totally need to brag that you’re a cousin…

**Wolfie grabs Sully and dances along**

I am so glad to find out that I’m not the only one doing a happy dance. And it comes out in time for a little summer time reading!!!!! Yippee!!

OOOOOOOH! Can’t wait! I love this series. Nice to see so many of us doing the happy dance together!

It’s the pack thing. We get happy together. ;)

So excited about this story. :-). Arrroooooooooo!