Those awkward moments when we’re not sure…if this a date, or not? Here’s a snippet from a scene that is a date, but not the kind she expected. Soul Deep. 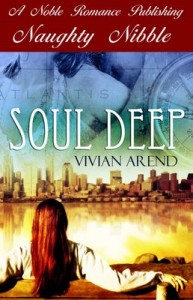 Waiting for his life partner has been difficult. Convincing her that she’s a part of an ancient Atlantis coupling is going to be harder. Luckily, Dylan Finbar’s had plenty of time to develop the patience and the persistence to outlast her protests.

Rachel Hart’s as mesmerized by the young visiting history professor as the rest of the student population. Only, she’s the one that makes his heart complete. Anam Seis, Soul Mates. Can she accept that the attraction between them has been centuries in the making and her potential lover wants not only her body but her soul?

The slip of paper in the CD case caught her eye and she reached for it slowly, almost afraid whatever it contained would be enough to break her tentative hold on reality.

Rachel closed her eyes as a shot of pain raced through her. The bench. Her retreat from the world during the dark days of her brother’s illness and death. A personal place she still returned to once a month.

How did Dylan know about the bench? Her confusion shifted and something deep inside broke apart. How dare he do this to her? She was so close to completing this stage of her life and moving on and this joker thought it was funny to play games with her?

Anger worked, she decided as she threw the case across the room. He wanted to meet her, did he? Thought he was some kind of merman or sea-god?

Rachel pulled a thick sweater over her head and thrust her feet into her shoes. Mr. Dylan Finbar might look like a god, but she was ready to do a little god–slaying tonight. Damned if he would get away with taking advantage of her and excuse it on mystical destinies. A good old case of lust, that’s all that happened in the lecture room. Crap. She needed to keep her fantasizing to truly available men. Not professors who claimed to be thousands of years old.

She stormed out of her apartment intent on telling him what she thought of his sense of humor. He’d better have a damn good explanation for himself or he’d find himself lacking the equipment to get involved in any more post-lecture seductions.

Rachel arrived a little late, pounding along the path ready to duel with whoever waited for her. She plopped down, her gaze darting back and forth on the path as if she expected him to pop out and surprise her.

Surprise her he would.

Dylan swam forward quickly, blanketing the area with the siren’s call. This time he deliberately sent it out in reverse. Instead of attracting visitors, no one would take this section of path, no one would disturb them as they talked.

It wouldn’t affect Rachel. Their proximity to each other only heightened their natural urges. The siren’s message was to warn others off so no one would interrupt them if he happened to get distracted for a few minutes by his need to taste her again. This afternoon had not been enough, merely stoking his fire with desire for his partner. His Anam Seis, soul mate.

As his shoulders broke the surface of the water Rachel stilled, her body tightening and pressing back into the hardwood bench. Her seductive scent drew him forward, the emotions surrounding her pitching into him hard and fast like one hundred and twenty proof liquor. Her anger, her fear. Her lust. She wanted to strangle him but she also wanted him. Her body sang to him and drove his passion higher.

It was a very good thing no others remained on the path because he was definitely touching her again. Now.

He paced up the beach to stand dripping wet before her as she rose to her feet. Her gaze seemed centered on his groin. As he approached, his arousal grew with every step until she jerked her eyes away, blushing furiously. He grinned. She made his body ache and the proof was there, unmistakable.

“Stop. Are you insane?” she hissed. Her head whipped from side to side as she yanked off her sweater and thrust it at him, keeping her eyes averted from his body. “Here, cover up. Where are your clothes? You’re going to get arrested for indecent exposure.”

“Good evening to you too, Rachel.” He chuckled. “I take it your afternoon went well and you enjoyed your reading assignment?” The flash of indignation in her eyes made him smile. A feisty one, his mate. He could hardly wait to take her home, where they could truly enjoy each other’s company. He thanked the gods for their wisdom because he would never have enjoyed a simpering weak woman as a life mate. This one would keep him hopping.

Be sure to head over to these authors check out some other awesome snippets. Enjoy your day!!

Nowadays there is lot of unforeseen circumstance which force men to take remedies. You can order medicines directly your office. In these latter days the stock you can find in online pharmacy is actually high. Some medications are as a rule used to treat many types of bacteria, such as tonsillitis and infections of the throat. Other ones are used to treat diabetes. Cialis is a remedy used to treat divers afflictions. What do you have to know about cialis order online? Presently many families search for the exact keyword ordering cialis online on the Internet. Perhaps you already read something about it. Having erectile dysfunction can beyond doubt complicate romance. What can cause erectile disfunction? A row of psychological issues can produce erectile malfunction. What should you discuss with a physician before taking Cialis? Any medication may cause dangerous side effects. Sometimes side effects can be actually dangerous. Talk to your pharmacist about the proper disposal of your drug.

I love seeing you drop by all the time. Thanks Maria!!

I am not usually this brief but…