Holiday snippets today, mine is a ski getaway for three best friends. Ready to cool off in the snow? 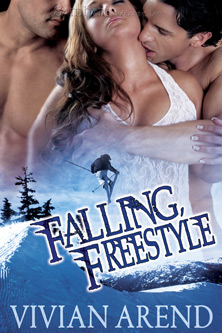 Never venture out of bounds without a buddy—preferably two.

Dara’s past four incredible years have been lived to the fullest. Along with her best friends, Kane and Jack, she’s left no local wilderness unexplored, no ski slope unchallenged. Yet lately she wonders why they’ve never seen her as more than a buddy with breasts. When—or if—either man will cross that unspoken line.

It’s a line Kane eyes harder every day. Since high school, he and Jack have shared everything. A condo, vacations—and their best girl. Kane’s ready to get serious about his wilderness school and outfitter business, and that includes putting down roots. Preferably with Dara.

Wary of the men who’ve recently been sniffing around Dara, Jack has a growing sense that he or Kane better make a move soon, or they’re going to lose out on their perfect match. Question is, who does she prefer…and who’s going to bring their easygoing trio to an end?

Overhearing the boys arguing over her, Dara’s floored—and torn. Choose between them? No way. Drastic measures are called for, a plan for their annual holiday getaway that will clarify her feelings once and for all—or lose everything in a sexual storm of whiteout proportions.

It was time to add a little fun to their day, Kane-style. “So, you enjoying your trip to Big White?”

Dara smiled at him. “Very much.”

“How long you here for?” A furrow appeared between her brows. He hurried on, knowing she’d catch on soon enough. “I’m here until Sunday. Sure hope the ski conditions hold.”

Her eyes widened as she figured out what he was doing and he fought to hide his grin. “Oh, I got here a few days ago myself. Yeah, the conditions are great.”

“Have you found a favourite run yet?”

“There’s a super one to the right of the chair, if you like them hard.”

Kane took a deliberate ogle down her body before looking her in the eye. “I know how I like them. Do you like them hard?”

Someone behind them snickered as they slipped into position for the chair to pick them up. Dara spoke softly. “You’re such a perv.”

“You wanna play some more?” he whispered back.

The look she turned on him was pure Dara. “Come here often?”

The entire ride up they exchanged sexually loaded innuendo until she was squirming in place. “Shit, Kane, you need to stop. I’m already hanging out the front of my ski pants, I don’t need to have a wet crotch as well.”

“People will just think you fall down a lot.”

She hit him on the arm. “How dare you insult me? I don’t fall down.”

“Well, there was that one time I seem to remember you doing a few spectacular wipeouts. Your first day on a snowboard.”

She laughed. “Oh my God, I’d forgotten you were there to see that. Good thing I’m flexible, or I would have snapped something for sure.”

He caught her eye and let the heat he felt for her simmer to the surface. “I think I’d like to see just how flexible you can be.”

Dara stared at his mouth, her pink tongue slipping out to peek between her lips and leave behind a shimmer of moisture. “Hmmm, that sounds—intriguing. But that would require you to catch me first, and I somehow don’t think you’re fast enough.”

They’d reached the top of the lift, slipping off the chair and heading toward the run they’d done earlier. Kane had to stop to fasten on his second boot. As he fumbled for the buckles, she stuck out her tongue and saucily wiggled her ass before poling hard and heading for the trees.

By the time he caught up to her, they were already a third of the way down the hill. He cut her off and laughed as she shouted, pulling out of his path. He herded her closer and closer to the trees, keeping an eye out for other skiers. The run was fairly empty—only expert skiers would take this route in the first place and the closer it got to lunch the fewer bodies remained.

She turned to the right and he paced her, coming in low on her side and forcing her back to the left. Small trails disappeared into the bush, and he saw the moment she made her break, turning sharply and disappearing from the main run. He followed her, staying on a higher trail so he could track her direction. They descended farther, Dara laughing the entire time until she pulled to a stop on top of a small rise hidden in the trees. She leaned over her poles, panting hard.

Kane glanced around quickly as he released one foot from his board. He maneuvered her back toward the nearest birch tree tucked in amidst all the fir and spruce.

“What are you doing? Kane, are you insane?” She was still laughing as he crowded her body with his. Her skis extended backward on either side of the tree, and he braced himself between her legs, rocking his groin against her core. Dara grinned her approval. “Oh hello, not insane.”

Nowadays there is lot of unforeseen circumstance which force men to take remedies. You can order medicines directly your office. In these latter days the stock you can find in online pharmacy is actually high. Some medications are as a rule used to treat many types of bacteria, such as tonsillitis and infections of the throat. Other ones are used to treat diabetes. Cialis is a remedy used to treat divers afflictions. What do you have to know about cialis order online? Presently many families search for the exact keyword ordering cialis online on the Internet. Perhaps you already read something about it. Having erectile disfunction can beyond doubt complicate romance. What can cause erectile dysfunction? A row of psychological issues can produce erectile malfunction. What should you discuss with a physician before taking Cialis? Any treatment may cause dangerous side effects. Sometimes side effects can be actually dangerous. Talk to your pharmacist about the proper disposal of your drug.

This is one of my favorite scenes in this, right after the scene in the restaurant. Now I want to go back and reread this one, need to locate it on my kindle. thanks for reminding me.