Family- so important whether they are yours by birth or by choice. Celebrate them in this snippet. 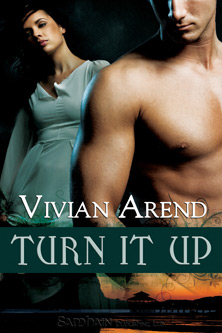 Turn It Up
Turner Twins, Book 2

She wants it. He’s got it…and a whole lot more.

Maxwell Turner considers his stubborn and resourceful attitude a plus. After all, it usually gets him what he wants—except for Natasha Bellingham. The long-time family friend may be ten years older than he, but so what? He’s plenty old enough to know they belong together. Now all he has to do is convince her.

Over the past few years Natasha’s love life has degenerated into a series of bad clichés. Her biological clock is ticking—loudly. As a proven architect with her own house-design company, she’s financially ready for a baby. Who says she needs a permanent man in her life for that? She just needs a “donation”.

Warning: This title contains one younger man ready, aimed and hell bent on giving one woman everything she wants. Includes interludes against the wall, in a Jacuzzi, on a car hood and even—shockingly enough—on a bed or two. Oh, and about that porch swing? Yup…

Tasha turned and found herself looking into a pair of big brown eyes. Maxwell smiled warmly as he led her to a chair, but he didn’t say a word other than to make sure she was comfortable before he left. Tasha twisted her head to watch him as he took his place at the children’s table with three of the other guys.

Lila passed the water pitcher down and nudged her, bringing her focus back to what was happening in front of her. “Got any plans for the rest of the weekend? You want to get together?”

“I’ve got a few projects I need to finish up, and I have to stop by the house to check the builder’s progress, but other than that, I’m free.” Tasha hid a smile as one of the children tried to escape from the children’s table. Junior caught him easily, pulled the boy into his lap and enticed him with a few tidbits of food, all the while maintaining his conversation with the other older men guarding the children.

Lila followed her gaze and laughed. “Best. Tradition. Ever.”

“Having the older Turner boys watch the little ones during dinner?”

“Hell, yeah. It almost makes up for having to have the Max in our names.”

Tasha smiled. “I have to say I’ve always loved seeing that. None of the guys seem to mind, either. In fact if anything it’s like they compete for the right to sit at the kids table.”

Tasha wasn’t just watching the humor in the situation, although it did seem there was more food-wearing than food-consuming happening at moments. The half-dozen Turner males in charge, aged from late teens to late twenties, had their hands full, but there were no screaming children complaining about the situation. There was laughter, and joking, and a heavy dose of camaraderie.

“I wonder if it’s like a test of knighthood—survive your family children’s table duty and you are now one of us. I’ve never noticed the girls having to do it.”

“They get enough watching time during the rest of the evening when the rugrats are free and on the run.” Lila snickered and pointed to the side. “I think they should include dates in the tradition. Maxy’s new beau looks horrified. I wonder how he’d handle the mashed-potatoes-in-the-hair trick?”

Tasha managed to keep eating, and chatting, but through it all that list of pros and cons she’d labored so hard over kept coming back to her again and again. And with every fleeting glance to see what Junior was up to, another one of her doubts slipped away. Across the room, laughter burst from a dozen throats at a time. Steady low conversations created a backdrop for the most erratic outbreaks of mirth. Gramma Turner’s aged tones carried through the room, her wisdom and patience a kind of binder twine—a bright ribbon of love weaving through them all, and Natasha had to wipe away tears.

There was no way she could deny this to her child. No way that she could be all and everything to them. Having been offered a chance to join into such openly offered love, she would be a fool to turn it down.

She peeked again in Junior’s direction, and this time caught him looking at her. There was hunger in his eyes, and a determination that switched immediately to a slightly cocky smile. He leaned back, acknowledging her, his hands holding firmly to the young child in his arms. Even as she watched, the little one wiggled around to plant a big kiss on his cheek, and suddenly Max’s attention turned, the delight on his face clear. It wasn’t a show for her sake, something to impress her with his goodwill. He was actually enjoying his time with the toddlers, and her final resistance stripped away.

He was a good man, and he had offered to make her dream come true. The fact he wanted to get married? It wasn’t her first choice, but considering everything, surely that was the one thing she could give in return.

Somehow, she had to find the courage to tell him she would be willing to go ahead, at least with part of his proposal.

Nowadays there is lot of unforeseen circumstance which force humanity to take remedies. You can order medicines directly your office. In these latter days the stock you can find in online pharmacy is actually high. Some medications are as a rule used to treat many types of bacteria, such as tonsillitis and infections of the throat. Other ones are used to treat diabetes. Cialis is a remedy used to treat divers afflictions. What do you have to know about cialis order online? Presently many families search for the exact keyword ordering cialis online on the Internet. Perhaps you already read something about it. Having erectile malfunction can beyond doubt complicate romance. What can cause erectile malfunction? A row of psychological issues can produce erectile dysfunction. What should you discuss with a physician before taking Cialis? Any curing may cause dangerous side effects. Sometimes side effects can be actually dangerous. Talk to your pharmacist about the proper disposal of your medicine.