We had to do it. It’s the final week and we’re pulling out all the stops and letting you know about our latest and final member of International Heat.

We got Aussied again. :wink:

Now Lexxie Couper and I don’t go back too far, but far enough to know I love her work. I went fan-girl on her after reading Savage Retribution. For those of you who’ve heard my story about becoming a writer, you know I discovered ebooks in January 2008. I then found out about the werewolf phenomena and proceeded to read every single book I could get my hands on. Including Lexxie’s.

She rocks as a writer. Savage Retribution was wild, untamed, hot as the blazes and set in Australia!! Bloody brilliant as far as I was concerned. Since then I’ve gotten to speak with her a few times, including when she gave me a few chapters from the next book in the that series (with a Tasmanian Tiger shifter!!) Now she’s got a million books out (okay, 14) and a few on the coming soon pages, and soooo much for you to enjoy.

She also rocks in her sense of humor. I told her she had to do a traditional lampshade dance to become an International heat member. She did one, videoed it and sent it to us. Highest bidder gets dibs on seeing it.

So welcome, Lexxie. Here’s to a long and fruitful partnership in IH. Oh, and the Flying Dutchman Space ship? We are totally going to write that story!! I’m thinking that there’s this map that’s been hidden…

PS. Kidding about the highest bidder. But who knows where that video might show up down the road. :wink:

Make sure you add a comment for a chance to win a prize in our final week of summer contest. 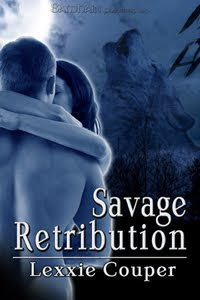 An animal rights activist is about to get a crash course in werewolves. One she may not survive.

Lone Irish werewolf Declan O’Connell has lost everything—his family, his clan, even his freedom—to his arch-rival, Nathan Epoc. The head of an underground werewolf clan and a brilliant scientist, Epoc plans to use Declan to create a super-wolf, a creature capable of shifting the balance of power in the lycanthrope world. But Epoc’s plans are about to be thwarted.

Regan Thomas, a determined animal rights activist, rescues what she thinks is an ordinary wolf from his notorious animal testing facility in Sydney, Australia. She gets more than she bargained for when the wolf turns into an extremely hunky, extremely naked man who immediately drags her into a world where the clash between two opposing werewolf clans could spell the end of humankind.

Declan has survived without a clan for more years than he cares to remember, but sexy Regan stirs up all his fierce, alpha-wolf instincts. Now Declan has one last chance at revenge. But can he keep Regan alive, and resist the overwhelming attraction between them, long enough to stop Epoc?

Summer in Australia has never been this hot… or this dangerous.

Be sure to leave a comment for a chance to win.

Nowadays there is lot of unforeseen circumstance which force people to take remedies. You can order medicines directly your office. In these latter days the stock you can find in online pharmacy is actually high. Some medications are as a rule used to treat many types of bacteria, such as tonsillitis and infections of the throat. Other ones are used to treat diabetes. Cialis is a remedy used to treat divers afflictions. What do you have to know about cialis order online? Presently many families search for the exact keyword ordering cialis online on the Internet. Perhaps you already read something about it. Having erectile dysfunction can beyond doubt complicate romance. What can cause erectile disfunction? A row of psychological issues can produce erectile dysfunction. What should you discuss with a physician before taking Cialis? Any treatment may cause dangerous side effects. Sometimes side effects can be actually dangerous. Talk to your pharmacist about the proper disposal of your drug.

I REALLY hope we get to see that video :D

Love those Samhain blurbs, they are always so much fun. This book looks really good. I am a sucker for any book with an irishman in it, thrown in a shapeshifting werewolf….I'll I've got to say is yummy. Looks like a great action adventure paranormal romance!

Yes, the Samhain blurbs are hilarious aren't they. This books sounds amazingly good and I'm definitely putting it on my wishlist.

Natasha and Armenia….do you get the feeling I'm stalking you? No? Damn, I'm not trying hard enough *grin* Booklover1335 – I'm with you on the blurbs. I've bought more than one Samhain book based on the blurb alone. And as for Irishmen…man, I want to lick from head to toe Colin Farrell AND Gerard Butler, preferably after they've licked me from head to toe….Hmmmm…now that gives me a story idea…. Joder – Anyone that says any of my books sound amazingly good is, as far as I'm concerned, the most intelligent person in the world. Will you be my friend?… Read more »

Savage Retributionsounds so great! I love Hot Paranormal Stories!!
I love The warnings they always make me want to buy the books even more!!

Is it Shifting Lust?
Do we have to find all of the paragraphs?

I am going with Shifting Lust.

You had me at extremely hunky, extremely naked man. lol