We did this theme once before–Villains, and at the time I had a real problem. Because I have less villain-ish villains than most. Wimp. I love the internal conflict, the man against himself, or in romance cases, hero and heroine having to deal with past ghosts to move onto the HEA.

But there is ONE villain who is simply delicious (ie evil). Meet Doug, in Wolf Flight. 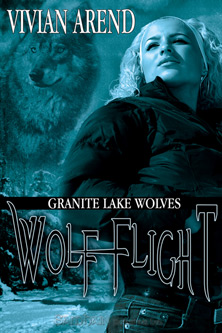 She turned toward him, the hair on the back of her neck standing upright as a shiver of disgust raced over her skin. She had hoped to avoid this summons for far longer. Stopping a polite distance away to stand before the massive fireplace, Missy clutched her fingers together and averted her eyes at the last second.

“Jeff has been gone for a month now,” he noted, his long well-groomed fingers tapping on the arm of the overstuffed leather chair. His stylish business suit, clean-shaven chin and immaculately groomed hair sharply contrasted with what she knew of his personality. She’d seen his wolf kill more often than necessary, even for an Alpha trying to maintain order in a large pack.

Missy rocked on her feet uneasily. Doug rose from his seat to tower over her petite frame, the heat from his body close enough to overwhelm the fire’s warmth. She stared away from him, looking over the heads of the wolves sprawled on the couch immediately in front of them. Don’t let him know how much you loathe him. Don’t show any sign of disrespect. Others in the room looked on with curiosity for a minute before turning back to their own conversations. Only the wolf enforcers she spotted scattered inconspicuously throughout the room tensed, ready to spring into action if needed.

The level of paranoia her Alpha encouraged among his warriors shocked her. Did they really think she would challenge Doug? It seemed few pack members were aware he was less than the honourable businessman he pretended to be. Missy wondered how much the Alpha shared with his closest allies, how many of his wrongdoings the other leaders of the pack approved. Or were the Beta and the rest ignorant victims as well?

“Does it bother you to hear me talk about my brother? Do you miss him that much?” Doug’s refined voice prickled in her ears. “I didn’t think you pined for his conversation or longed for his arms to hold you at night.”

He laughed softly and the sound grated on her nerves like nails on a blackboard. Over the past couple years Missy had become aware of slow changes in her abilities, including an increased sense of others’ motivations. The evil Doug delved into permeated every fiber of his being, and Missy turned her head away to avoid showing her disgust. She swallowed hard and forced down the emotions that threatened to engulf her. Her anger, her fear. The almost overwhelming desire to turn and flee from his presence.

She couldn’t run, not yet. She needed more time. Time to find an escape from the trap she knew closed around her as each day passed.

Doug ran a finger down her cheek, plucking at a blonde curl, and her gorge rose. Missy concentrated on presenting a calm façade, forcing her eyes to blink naturally as she slowed her pulse, her breathing. Calming all the telltale signs that could alert this powerful werewolf of her intentions.

He was her brother-in-law, her Alpha, but she refused to let him control her. The finger continued a slow path down her body as she stood stock-still.

“Jeff never did know what a treasure he had, did he?” Doug asked, his dark voice dirty like an oily slick over her skin. He leaned close to whisper in her ear. “My sweet Omega.”

The rest of the villain sharing snippets:

Nowadays there is lot of unforeseen circumstance which force men to take remedies. You can order medicines directly your office. In these latter days the stock you can find in online pharmacy is actually high. Some medications are as a rule used to treat many types of bacteria, such as tonsillitis and infections of the throat. Other ones are used to treat diabetes. Cialis is a remedy used to treat divers afflictions. What do you have to know about cialis order online? Presently many families search for the exact keyword ordering cialis online on the Internet. Perhaps you already read something about it. Having erectile disfunction can beyond doubt complicate romance. What can cause erectile dysfunction? A row of psychological issues can produce erectile malfunction. What should you discuss with a physician before taking Cialis? Any treatment may cause dangerous side effects. Sometimes side effects can be actually dangerous. Talk to your pharmacist about the proper disposal of your medicine.