Just something from Silver Mine, since the cover is now official. And the blurb. I’m in the middle of edits for this Sept 11 release, and totally in love with Chase and Shelley. 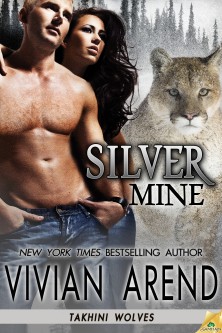 If a tree falls in the forest, duck…

Life in isolation is the safest place for Chase Johnson, a crossbreed who doesn’t know which form he’ll assume next—cougar or wolf. Once a year, his unelected position as spokesman for the Yukon outcasts forces him to visit civilization. This time he runs across someone unexpected. She’s not his mate, but she pushes all the right buttons.

It’s taken years for Shelley Bradley to gather the courage to return to her home pack. In spite of being the lowest of the low—a shifter who can’t shift—she’s determined to make a place for herself as the Whitehorse locals’ new vet-slash-doctor.

There’s definite electricity between her and Chase, but sex with fellow shifters and the inherent mind games got old a long time ago. Ignoring him seems best. When he shows up at her office with a wound that won’t heal, she’s stuck—yet drawn to solve this medical mystery.

As they journey deep into outcast territory in search of answers, their powerful sexual attraction crumbles her resistance. But time is of the essence. If a cure can’t be found before his human and cougar succumb to his injury, he—and others like him—will die.

Warning: Contains a silver-tongued, hairy-chested, lean-muscled Alpha who’s got what it takes to lead in the wilderness and in the bedroom. Yeah, I know…not really much of a deterrent, is it? Throw in continuing territorial wars and a domestic cat. Stir and enjoy the chaos.

“You sure you’re not a politician?” she asked.

“Hell, no. They eat politicians where I’m from.”

Shelley discovered her hands stroking him. Bad hands, to take control like that. “You’re very reasonable. Far more reasonable than most men. Or shifters.”

He said it so dryly Shelley lost control and snorted in amusement. “No. No, you certainly aren’t.”

Chase brought them closer. His fingers in her hair, smoothing the strands away from her face. “So does that option interest you at all?”

“Fooling around. As far as you want to go. I’ll follow your lead, but I want to touch you. Make you feel good.”

A shiver of temptation struck. And when he brought their mouths together again, part of the decision was made.

Damn, the man could kiss. He was so sneaky she didn’t even register when he picked her up and carried her across the room. He must have, though, because suddenly she was sitting on his lap on her couch, straddling him in fact. That wicked tongue of his brushed along the rim of her ear before he dipped inside, and she shivered.

Goose bumps, check. Body aching for a touch, check. He kissed the hollow of her throat, and she was lost.

No-sex sex was awesome. This? This she could totally do.

Nowadays there is lot of unforeseen circumstance which force people to take remedies. You can order medicines directly your office. In these latter days the stock you can find in online pharmacy is actually high. Some medications are as a rule used to treat many types of bacteria, such as tonsillitis and infections of the throat. Other ones are used to treat diabetes. Cialis is a remedy used to treat divers afflictions. What do you have to know about cialis order online? Presently many families search for the exact keyword ordering cialis online on the Internet. Perhaps you already read something about it. Having erectile dysfunction can beyond doubt complicate romance. What can cause erectile malfunction? A row of psychological issues can produce erectile disfunction. What should you discuss with a physician before taking Cialis? Any medication may cause dangerous side effects. Sometimes side effects can be actually dangerous. Talk to your pharmacist about the proper disposal of your medicine.

Yum! Gonna be another scorcher I see. :-)

Well, Takhini heat level. A little hotter than the Granite Lake books–mainly because the book is longer.

Sounds very intriguing!! How can they not be mates though??

Guess you’ll find out in September! ;)

September seems so far away!

Wolf Line before then, at least!

Dang, I cannot wait for this! How did I miss this cover? I LOVE it. Sigh.