November 6, 2015 | Leave A Comment
We’re closing in on the next book in the Six Pack Ranch series, and to make sure you’re caught up, we’re going to go through the books that lead up to the new story. Rocky Mountain Shelter can be read alone, but it’s better for being a part of the whole!
This week: ROCKY MOUNTAIN ROMANCE 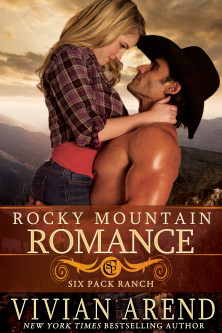 “I want to see you again,” he blurted out.

Maybe if she’d never imagined hearing those words this would’ve been more awkward, but she’d had enough time to think it over. She’d prepared for every possibility when she’d decided to return to Rocky Mountain House, even this one.

Prepared, and planned to enjoy it.

She kept walking. “I don’t know what you’re talking about. I don’t think we had an actual relationship, not one that I’m interested in rekindling.”

“Prove it?” A burst of laughter escaped before she could stop it. “Steve, when we were dating, half the time you didn’t know what day it was. And I don’t even know that I want to call it dating. More like conveniently seeing each other when it worked out. That part wasn’t just your fault. I’ll take some of the blame, because I was damn busy with my job.”

“We were both busy, but that doesn’t give me an excuse for being a shit. It also doesn’t have anything to do with what I’m talking about right now.”

Melody jerked to a halt so she could toss him her most disdainful expression. “What happened between us a year ago, and more? How does that have nothing to do with the fact you want to see me again? You’re not making any sense.”

His lips twitched upward as his gaze drifted over her, his attraction apparent. “Let’s start with a clean slate. Hi, you must be the new vet in town. I’m Steve Coleman, and you’re going to be seeing a lot of me.”

Unbelievable. And yet…interesting. The old Steve would have joked around, but never with that intense focus as if he was prepared to actually do something if she argued with him. “Well, it appears you’ve grown some balls since the last time we met, but I don’t know that it’s enough.”

“Trust me, I’ve got the balls, for many things.”

She shook her head, clicking her tongue as if in disbelief. “If that was some sly reference toward your sexual prowess? There’s another place you’re mistaken. I’ll give you points for knowing where to find a woman’s clit, and I had more than a few orgasms with you—thanks for them, by the way.”

His grin broadened, and she was almost reluctant to deliver the killing blow.

“But, Steve? I’m afraid you’re just too vanilla for me.”

Melody spun on her heel and marched away, her own grin breaking free as he stood frozen on the spot behind her, sputtering in response. She kept walking, catching hold of her door and quickly crawling into the borrowed beast.

She got the door shut before he caught up with her, but there was no way she could ignore him. Steve stood inches from her closed door, his expression folded into a frown until she relented and rolled down her window.

He started in right away before she could speak, his utter shock apparent. “Too vanilla for you?”

Melody answered briskly. “I found out a few things about myself while I was away at school this year. So, I’m glad we’re going to be friends, and I look forward to working with the Colemans now that I’m back, but that’s pretty much all us time is going to be. Have a nice day.”

She put the truck in drive and left him standing in the dirt, containing her laughter until she was on the main highway and headed for home.

This was where the Steve she’d known would saunter back to the party and forget about her. Oh, maybe he’d give a few moments’ thought to challenging her comments, but then something would distract him, and the next time they met? It would be as if this conversation had never happened. He’d ask her out again, she’d turn him down.

Eventually he’d get bored and move on. It was sad, but inevitable.

Except…the flash of fire she’d seen in his eyes in her rearview mirror as she drove away wasn’t familiar. Something fluttered in her belly, and she wondered if maybe she’d poked a little too hard.