It’s finally here! Anthologies always take that much longer to come out in print, so it’s been a year and a half since WOLF GAMES first became available in ebook format. Six month later, WOLF TRACKS arrived, and now those readers who have been asking for PRINT can finally have their own version of the wolfies.

It looks marvelous next to Under the Northern Lights… :D Just saying.

IN FACT- IT LOOKS SO GOOD, I THINK I HAVE TO HAVE A GIVEAWAY! Sorry for the shouting. Ahem, just wanted your attention. Leave a comment here to be entered to win a copy of Under the Northern Lights (this is the 1st PRINT anthology of the Granite Lake books).

I’ll draw a name next Monday of the winner. International entries as always are welcome- if you can buy my books where you live, I can send out a prize if you win. 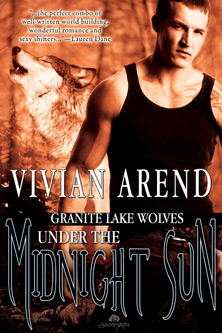 To find love, sometimes you have to blaze a whole new trail.

After seven years of denial, Maggie’s inner wolf is in full revolt. The last thing she wants is a mate, particularly when simply looking at another wolf scares her to death.

Sheer chance puts Erik in the right place to catch the weak and shaky Maggie. With one touch, he realizes the reluctant female werewolf is his mate.

Selected for the premier sporting event for wolves in the north, Maggie will not only have to team up with Erik, she’ll have to face down her fear of wolves. Especially her own.

Read an excerpt from Wolf Games

TJ’s usual laid-back attitude vanishes when he comes face to face with someone he didn’t expect. His mate. His very human mate. If he intends to claim her, he’s going to have to move fast.

Pam is definitely tempted to indulge in some Northern Delight with TJ—temporarily, not forever. In her world, true love is a fairytale that seldom, if ever, comes true.

Okay, so maybe staging a kidnapping wasn’t TJ’s best idea, but at least Pam agrees to his deal. He’s got one week in the wilderness to prove she’s his mate. She’s got one week to discover if forever is possible.

Read an excerpt from Wolf Tracks

Nowadays there is lot of unforeseen circumstance which force humanity to take remedies. You can order medicines directly your office. In these latter days the stock you can find in online pharmacy is actually high. Some medications are as a rule used to treat many types of bacteria, such as tonsillitis and infections of the throat. Other ones are used to treat diabetes. Cialis is a remedy used to treat divers afflictions. What do you have to know about cialis order online? Presently many families search for the exact keyword ordering cialis online on the Internet. Perhaps you already read something about it. Having erectile dysfunction can beyond doubt complicate romance. What can cause erectile malfunction? A row of psychological issues can produce erectile dysfunction. What should you discuss with a physician before taking Cialis? Any curing may cause dangerous side effects. Sometimes side effects can be actually dangerous. Talk to your pharmacist about the proper disposal of your medicine.

Weeeeee! Congrats!
They do indeed look good together.

This is so fabulous! When I love e-books, I try to back them up with paper copies to hold in my hands and read again and again. I still don’t entirely trust that computers won’t randomly delete my favorite things. lol

Please enter me in the drawing!

Congrats on your new print release. I love this series. Thank you for the giveaway.

Congrats on the print release. It is a beautiful book!

You always have such wonderful covers for your books! This one is great! Congrats on the print release! Thanks for the chance to win! :D

What a wonderful cover and congrats on the new print release.

Please enter me for that prize, I would love to read about Granite Lake wolves :D

So, here’s the deal, I love the Granite Lake wolves. I have the whole series on my Kindle. So, part of me feels bad for entering the contest to win a print copy of the 1st anthology. But, the selfish side of me says….bring it on! I want to win. Thank you for letting me show my dual personality. Thanks for the giveaway!

Congrats on the print release.Awesome cover.
Thanks for the giveaway

So awesome! Bring on the wolfies in ANY format. :D

I would love to win one on your Granite Lake Wolves books! Congrats on the release and thank you for the giveaway! =D