April 15, 2016 | Leave A Comment
We’re closing in on the final book in the Thompson & Sons series, and to make sure you’re caught up, we’re going to go through the books that lead up to the new story. A WILD RIDE can be read alone, but it’s better for being a part of the whole!

This week: LET IT RIDE 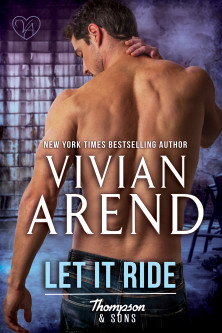 He’s her rock in the midst of the storm

When Maggie Ward’s world is shattered by sudden tragedy, the only person who makes her days bearable is Clay Thompson. Protective and caring, he’s everything she could ask for in a friend. But when Maggie starts longing for more than friendship, it’ll take a little heated seduction to convince this stubborn mechanic she’s ready to start living again.

She’s his heart, whether he knows it or not

Tough guy Clay is good at taking care of others. It’s what he does. But when the one woman he’s always desired needs him to take care of her, he’s faced with a new challenge. Suddenly it’s not just responsibility driving him, but a wild desire to make Maggie his.

Following his heart might get him the girl…but it could also mean sacrificing the family he’s held together for years.

Nowadays there is lot of unforeseen circumstance which force people to take remedies. You can order medicines directly your office. In these latter days the stock you can find in online pharmacy is actually high. Some medications are as a rule used to treat many types of bacteria, such as tonsillitis and infections of the throat. Other ones are used to treat diabetes. Cialis is a remedy used to treat divers afflictions. What do you have to know about cialis order online? Presently many families search for the exact keyword ordering cialis online on the Internet. Perhaps you already read something about it. Having erectile disfunction can beyond doubt complicate romance. What can cause erectile dysfunction? A row of psychological issues can produce erectile malfunction. What should you discuss with a physician before taking Cialis? Any treatment may cause dangerous side effects. Sometimes side effects can be actually dangerous. Talk to your pharmacist about the proper disposal of your medicine.