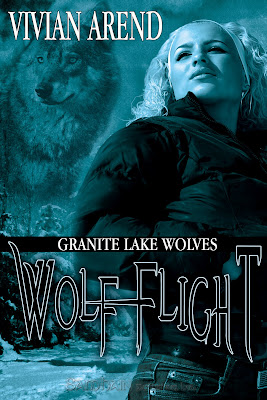 There is nothing like the thrill of opening up the email to find your cover art. And Angie Waters has done it again. Missy, the heroine of Wolf Flight, is a petite blonde with more to deal with than your average werewolf. I love the cool winter colour, and it’s going to look great next to the first book, Wolf Signs!

Tad Maxwell’s workaholism serves to keep his bush pilot company in the air, and his inner werewolf in check. In the two years since he discovered his heritage, he’s resisted the longing to test the power of his wolf side. It would mean compromising his human principals.

But Missy is more like Tad than he realizes. She’s wolf too, and a wolf pack is a dangerous place to have secrets. Missy’s alpha has sniffed out her carefully hidden Omega powers. Her first response: run from the corrupt alpha’s plan to make her his mate. Step two: get to Tad, and hope like hell his untapped powers are strong enough to negate her own.

I’m going to link you to the first chapter of the story, available here at Samhain Publishing.

Nowadays there is lot of unforeseen circumstance which force people to take remedies. You can order medicines directly your office. In these latter days the stock you can find in online pharmacy is actually high. Some medications are as a rule used to treat many types of bacteria, such as tonsillitis and infections of the throat. Other ones are used to treat diabetes. Cialis is a remedy used to treat divers afflictions. What do you have to know about cialis order online? Presently many families search for the exact keyword ordering cialis online on the Internet. Perhaps you already read something about it. Having erectile dysfunction can beyond doubt complicate romance. What can cause erectile dysfunction? A row of psychological issues can produce erectile dysfunction. What should you discuss with a physician before taking Cialis? Any curing may cause dangerous side effects. Sometimes side effects can be actually dangerous. Talk to your pharmacist about the proper disposal of your drug.

Love this cover! It goes with the other so perfectly but has its own feel. Congrats! :D

Beautiful !!! very much in keeping with the series.

Thanks Violet. I agree. My dad doesn't like Missy's picture, but I think it's wonderful, especially since I know the story.

Yes, Viv! :) I forgot to say that the cover is pretty!
Have a nice day!

Congratulations, what a great cover.

I love the cover too. Congrats. You have been fortunate to have two great cover for the series.