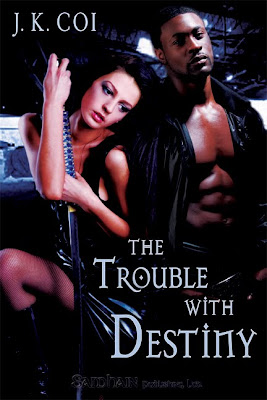 J.K. Coi is one of the great authors that I’ve gotten to know over the past year. She’s got a fab story hitting the eBook shelves today and …I’ll let her tell you the rest herself!!

A huge thank you to Viv for having me as a guest here today!

I’m celebrating the re-release of one of my favourite books this week. The Trouble With Destiny is available September 18, 2009 from Samhain Publishing. This novella was previously released last year, but now it has been re-edited and re-vamped with a great new cover!

But I’ve been asked a lot recently what I’m working on now, whether it will be another book in my Immortal Series, or maybe the next chapter in Sarah and Dorian’s story. Actually, while both of those are definitely in the works, after finishing a short story and doing some editing of another, my most exciting project right now is something brand new!

Sadly, I can’t say too much about it. Not that it’s super secret, but I am uber-superstitious about certain things. Let’s just say that this new direction will not involve vampires or immortals or demons, but it will have a few characters that are pretty hard to come by in this world.

The Trouble With Destiny

There’s got to be more to life than studying…

The starving student routine is starting to wear a little thin for Sarah McInnes. If only she could be left alone long enough, she could finish grad school, get a normal nine-to-five and finally afford to move out of her one-room apartment. Maybe even afford a decent wardrobe.

Destiny has other ideas. Not the least of which is the mysterious, overbearing, insufferable Dorian…who also happens to be the hottest thing this side of hell. Three months ago he saved her from certain dismemberment at the hands of a daemon. He also discovered she possesses the ability to send these beasts back to hell where they belong.

Now he not only won’t leave her alone, he’s forcing her to face certain facts: Her social life isn’t going to improve anytime soon. And she may never make it to calculus on time again.

It’s enough to piss a girl off.

Warning: This title contains a beautiful, capable college student whose mystical tats have gotten her in almost as much trouble as her smart ass mouth. It also includes a devastatingly hot, mysterious warrior whose sense of humor is as non-existent as his humanity.

I braced myself when I exited the bathroom, wary of the neon light I expected to find streaming in through my one large window. But surprisingly, the curtains had been pulled tightly closed. Dorian must have done that. He’d know my headache would be coming on hard and fast, making my eyes sensitive to the lights from Mrs. Patel’s grocery sign. She had thoughtfully hung it just outside my window, and it made the whole apartment glow with bright green and yellow light all night long.

I threw a quick glance in Dorian’s general direction as I came out of the bathroom. Holy hell. There should be some kind of law against a guy looking that good.

Honestly though, as much as I could appreciate the view, I was tired, and my head was already pounding too hard for it to have a substantial effect on me. Sad but true.

Like a coward, I avoided looking directly at him. My circa 1980s, thirteen-inch television set with the manual dials along the side panel was turned on with the volume down low, and if I didn’t know better I’d say that Dorian was engrossed in the final minutes of the hockey game. He was quiet as I walked past the sofa where he sat. Too quiet.

I kept my gaze averted as I passed him on the way to my bedroom. There was a thick tension suddenly swirling in the air, so I knew he wasn’t asleep.

Despite my best intentions, the draw was too strong and I finally looked. He was staring back at me. I met his gaze. I drowned in the depths.

He blinked, surprised. “Stop what?”

“Stop that…that thing you’re doing with your eyes. Stop looking at me like you want to devour me.” I hesitated. Maybe that was a poor choice of words, because it sounded more like an invitation than a rebuff even to my ears. Heat crept up my throat and into my cheeks.

His breath caught and I could see golden flames starting to leap and dance in the deep brown of his eyes. All of a sudden I wasn’t worrying so much about my headache anymore. What headache? And I didn’t really care that my body ached.

Now I ached in a whole new set of places.

“What do you mean you can’t?” Whoa. That sounded a lot like an admission. Was Dorian actually acknowledging that he was attracted to me? Was he saying it right out loud for the public record? Was this the Twilight Zone?

Wait a minute. “What do you mean you would if you could?”

It wasn’t that I doubted Dorian might feel something for me. I’m not exactly hideous, even if I haven’t had a date in an eon and a half. I just never expected him to admit it, or ever do anything about it.

But that didn’t mean it wouldn’t have come up sooner or later. I know I couldn’t have continued to ignore the snaps of electricity crackling between us forever. In the last several weeks it had built to what could only be termed explosive levels. In fact, I felt like I had been walking through a brambly field strewn with fifty-year-old land mines. Each step was measured, careful, because they couldn’t all be duds and it was just a matter of time before I put my foot down on a live one and it blew me to smithereens.

After a slight pause and a deep breath, Dorian stood and walked to me. I wasn’t sure of the wisdom of that idea. The part of me that worried over my self-preservation knew that Dorian and me, together, was a nuclear disaster waiting to happen and wanted to take a corresponding step backward. But the wilder, more daring part of me wondered if the crash and burn might be worth it. That part knew that Dorian and me, together, would be the hottest, sexiest, most explosive disaster that ever rocked the Casbah.

Wow! Thanks for dropping in JK, and man…could you get any more mysterious, woman? You’re driving me insane! Luckily there’s something good to read to distract me…

Nowadays there is lot of unforeseen circumstance which force people to take remedies. You can order medicines directly your office. In these latter days the stock you can find in online pharmacy is actually high. Some medications are as a rule used to treat many types of bacteria, such as tonsillitis and infections of the throat. Other ones are used to treat diabetes. Cialis is a remedy used to treat divers afflictions. What do you have to know about cialis order online? Presently many families search for the exact keyword ordering cialis online on the Internet. Perhaps you already read something about it. Having erectile dysfunction can beyond doubt complicate romance. What can cause erectile dysfunction? A row of psychological issues can produce erectile dysfunction. What should you discuss with a physician before taking Cialis? Any treatment may cause dangerous side effects. Sometimes side effects can be actually dangerous. Talk to your pharmacist about the proper disposal of your medicine.

Thanks again for letting me visit today!