December 23, 2016 | Leave A Comment
Takhini Wolves, book 2 features a crossbreed shifter who lives in isolation, and a doctor who can’t shift but needs to be around pack. 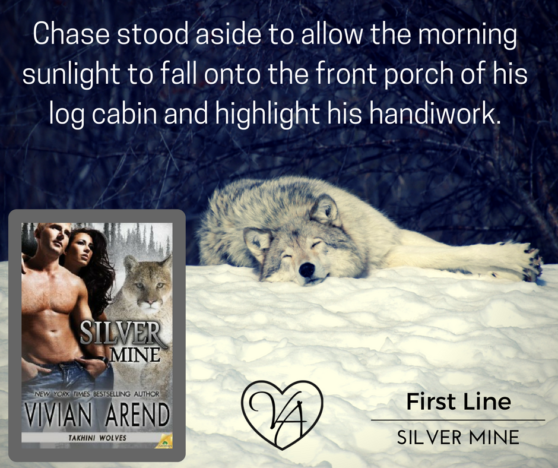 Chase stood aside to allow the morning sunlight to fall onto the front porch of his log cabin and highlight his handiwork. He attached another piece of duct tape to the rocking-chair arm, circling three times to tighten the sticky material around the wrist he’d strategically placed along the broad armrest. He repeated his actions on the left side before kneeling to secure the young man’s ankles, one to each side of the sturdy extended rockers.

Another strand of tape around Jones’s naked torso pinned the wolf shifter against the chair back. For extra measure, Chase tore off two more long pieces and pressed them in an X across the shifter’s hairy chest.

Finally satisfied, Chase sat in the Adirondack chair next to the rocker and sighed contently.

“You know, if you’d asked, I would have been happy to let you stay.” Chase tipped the mouth of his beer bottle toward the silent figure beside him. “It’s not that difficult a job, opening your trap and asking permission. Sometimes that’s called conversation.”

A long slow drink followed. Chase gazed to his left over the tall pine trees crowding the base of the remote wilderness lake as he sipped the cold amber liquid. “Beautiful, isn’t it, Jones? I can’t think of another place I’d prefer to be. I’m mighty proud of what I’ve built here.”

“Why, yes, Chase, you’re right. This is a fine home you’ve got.” Chase raised his voice, matching the higher tones of the arctic wolf shifter as best he could. “And, Chase, I’d sure appreciate getting to stay here while you’re gone. I promise to take care of things.”

The rocking chair creaked as Jones moaned, his head lolling from the left to the right, mouth gaping open. Chase watched for a sign the young man was coming around. A low snore escaped instead, and Chase shook his head.

“Boy, you don’t know how good you got it. I should have tied you to the boat and sent you floating into the middle of the lake. I’m going soft in my old age.”

He adjusted his chair to face fully toward the water, ignoring the incapacitated wolf on his right. It was a glorious late June day, and hell if he would allow Jones to mess with the tranquility of the moment. Chase drank slowly, enjoying his view. Summer had officially arrived in the high Yukon, which meant there were only a few pockets of snow left in the shadowy places under the thicker sections of forest. The sun was hot enough the new green grasses were edging toward drying already, the limited growing season of the north a rush of forward motion hurtling toward death.

It was the most serene and idyllic of settings, if he ignored the hairy beast beside him trussed up like a chicken.

Serene, and lonely. Appropriate for most of the men who lived in these parts. Men like him.

Chase laughed as his thoughts followed a familiar path. He could have set his watch on it. Seemed every year this time he tended toward a bout of philosophical musings. He chewed on his bottom lip for a while and debated going fishing. He really should head out again, but until he had dealt with the disaster on two legs next to him, his hunting would have to wait.

Quiet. Nothing disturbed the air but the light creak of the rockers against the wooden deck boards and the wind playing with the pines. He was used to silence. Didn’t mean he loved it, but it fit the setting.

Nearly an hour later he woke from a catnap, an extra loud gurgle echoing from the wolf at his side.

Nowadays there is lot of unforeseen circumstance which force men to take remedies. You can order medicines directly your office. In these latter days the stock you can find in online pharmacy is actually high. Some medications are as a rule used to treat many types of bacteria, such as tonsillitis and infections of the throat. Other ones are used to treat diabetes. Cialis is a remedy used to treat divers afflictions. What do you have to know about cialis order online? Presently many families search for the exact keyword ordering cialis online on the Internet. Perhaps you already read something about it. Having erectile dysfunction can beyond doubt complicate romance. What can cause erectile disfunction? A row of psychological issues can produce erectile malfunction. What should you discuss with a physician before taking Cialis? Any medication may cause dangerous side effects. Sometimes side effects can be actually dangerous. Talk to your pharmacist about the proper disposal of your drug.