WOLF FLIGHT re-releases today. Curl up this weekend with a wolfie of your own! 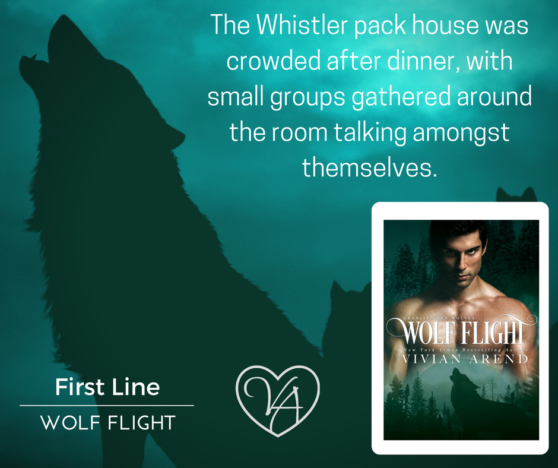 The Whistler pack house was crowded after dinner, with small groups gathered around the room talking amongst themselves. Conversations quieted for a moment as laughter burst out from where the Alpha and his cronies sat in the prime seats before the huge stone fireplace.

An icy warning trickled up Missy Leason’s spine, and she gave up on the discussion in front of her. She rose from her chair and headed quietly toward the exit, weaving between the couches and recliners that filled the meeting and relaxation area for the pack.

Missy had no illusions about the precariousness of her position. As the widow of a high-ranking wolf, even one whose position had come from his family relationship instead of his power, she was an obvious target for any of the wolves looking to improve their standing in the pack.

Which would be, oh, pretty much everyone.

Only she wasn’t worried about all of them, just one very dangerous individual.

She turned obediently toward him, the hair on the back of her neck standing upright as a shiver raced over her skin. She had hoped to avoid this summons for far longer.

Stopping a polite distance away placed her before the massive fireplace. Missy clutched her fingers together and averted her eyes at the last second.

“Jeff has been gone for a month now,” Doug noted, his long well-groomed fingers tapping on the arm of the overstuffed leather chair. His stylish business suit, clean-shaven chin and immaculately groomed hair sharply contrasted with what she knew of his personality.

She’d seen his wolf kill more often than necessary, even for an Alpha trying to maintain order in a large pack.

Missy rocked on her feet uneasily.

Doug rose from his seat to tower over her petite frame, close enough the heat from his body overwhelmed the fire’s warmth.

She stared away from him, looking over the heads of the wolves sprawled on the couch immediately in front of them. Don’t let him know how much you loathe him. But don’t show any sign of disrespect, either.

Others in the room looked on with curiosity for a minute before turning back to their own conversations. Only the wolf enforcers scattered inconspicuously throughout the room tensed, ready to spring into action if needed.

The level of paranoia her Alpha encouraged among his warriors shocked her. Did they really think she would challenge Doug?

Can’t wait to read these!

Looking forward to rereading these books

Wolf Signs is my favorite book ion the series. Of course, it is also the first I read from Viv.

Can’t wait to check this out.

Am glad these are being re-released. Can’t wait to re-read them.

Just ordered Wolf Signs for my kindle. Looking forward to this series!

My favorite is WOLF TRACKS I liked the storyline and the characters.
It was the first one I read of this author’s books.

I have all ot them and have read and re-read them again and again. My favorites are Wolf Signs and Wolf Tracks.

My favorite Wolfie is T. J. He is such a goofball. I was estactic to see him get his happily ever after.

these books are great. My favorite is wolf games

the one that started it all Wolf Signs is when I fell in Love!! but I really loved them all!!

My favorite story is “Wolf Games”

My favorite is Wolf Signs

Love all the covers! My favorite is Wolf Signs.

I gotta step up my game and read this series.

Wolf Games is my favorite.

Trying to leave a “Blog Comment” for the Rafflecopter Entry – Let us know your favorite wolfie book!

Love how TJ fights it – going with Wolf Flight but love Wolf Signs Too.