Do you love a sexy cowboy and the misunderstood girl next door? Then you must read ROCKY MOUNTAIN REBEL! 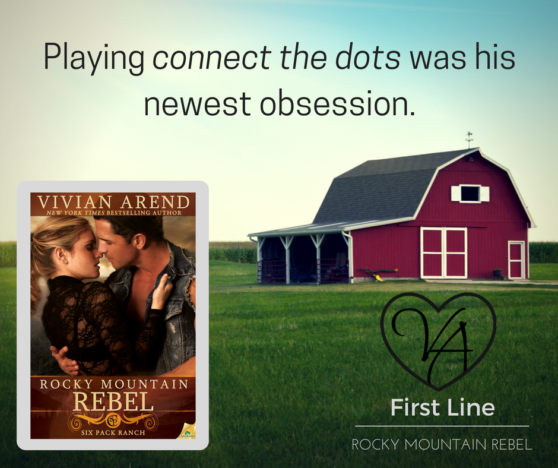 Chapter One
Playing connect the dots was his newest obsession.

Joel Coleman took another drink, the tepid coffee left in the bottom of his cup barely registering. He was too fascinated with the smooth, exposed line of Victoria Hansol’s neck as she stood one table over taking down an order. With her shining brown hair pulled into a ponytail, his contemplation lingered on the freckle he wanted to nibble. Leading up to the one on her jawline. Right before he tasted the one hovering to the side of her luscious-looking mouth.

He could play this game all day if his estimate of how far her freckles extended was accurate.

Joel dragged his gaze off the woman he’d been ogling, and focused across the table. His brother’s grin was familiar enough. Joel saw pretty much the same face every time he glanced in a mirror. Dark hair, square jaw. As identical twins, he and Jesse had their share of mistaken-for-each-other stories.

Jesse peeked over his shoulder, turning back with a laugh.

“Whoa, hold it.” Joel shook his head in denial. “Just because she’s built doesn’t mean I want to get involved with her. I’m admiring the view, that’s all.”

“View is rather tasty.” Jesse’s brow rose, and he hummed for a moment. “How come we’ve never gone out with her?”

Damn it. Joel’s stomach clenched. “We? Jesse, will you fucking stop that? There is no ‘we’ when it comes to dating, okay? There are girls you date, and girls I date.”

“Fine. No need to bite my head off.” Jesse flopped back in his seat, hands raised in mock surrender.

Joel fixed his twin with a firm glare until Jesse laughed and returned to his plate. This was not a matter Joel was willing to bend on. Not anymore. They’d gotten a reputation over the years, him and Jesse. Not as wild as the Hansol family, but that was probably because the oldest of their immediate Coleman kin were squeaky clean and respectable. As the youngest of the Six Pack clan—literally the youngest by all of thirty minutes after Jesse’s arrival—Joel was ready to move on.

He stared at Vicki’s legs as she stood at the far end of the café, topping up a customer’s coffee. He’d seen the woman around town for years. Gone to school with her, in fact, although he and Jesse had been a couple grades above her. He knew about the Hansol girls, or what the community gossiped about them. The rotating door on her oldest sister’s bedroom had been discussed during many a late-night drunken boast-session among the less-than-courteous males who’d taken Sarah up on her willingness to share.

The short skirt that was part of the waitress uniform swirled around Vicki’s limbs as she moved, and Joel fought to find something else to concentrate on. Because there was no way, no matter how attracted he was, no way was he going to get involved with one of the town’s bad girls.

This was the year he made some changes. He was done with college, back on the ranch, and ready to move forward. Didn’t mean he wasn’t going to have any fun, but he planned to watch his step a little more.

Which put Vicki Hansol on the drool over at a distance, but avoid list.

Suddenly, there she was, a polite smile that didn’t quite reach her eyes pasted on her lips. “Either of you boys want dessert?”

Jesse shook his head. “Not for me, thanks.”

He pulled out his cellphone to answer it, talking quietly toward the window.

Joel gazed up at Vicki, working hard to focus on her face and not the amazing rack pushing the front of her uniform. “You bake today? Because, frankly, no one else here can beat your pies.”

Her smile came alive, brightening her entire face and making her brown eyes sparkle. “Made a dozen this morning. You want cherry or lemon meringue?”

Something inside twisted. Her obvious pleasure at the simple bit of praise struck him as odd. As if she didn’t receive many compliments. “A piece of each, please.”

Vicki nodded, reaching for the empty plates in front of them before retreating without a word, her skirt swaying over the rounds of her ass as she vanished into the back of the café.

Jesse hung up and pushed his phone into a pocket. “When you’re done lunch, Dad says to meet him at the seed store. He’s going to order for next year. Wants your opinion on some new strains.”

“No problem. Are you finishing the south fields this afternoon?”

Jesse wrinkled his nose. “Probably take all day tomorrow as well to get done. Blake took a break to hit some prenatal thing with Jaxi. Can’t fault our big bro for taking time off to do his family duty, but there’s more to finish than possible in one run.”

Joel nodded. “He should have said something earlier. I can give you and Blake a hand in the morning if the third tractor is running.”

“That would be great. Hey—did I tell you? We got an invite to a party in Red Deer this weekend. You want to head out Friday night or Saturday?”

Neither. But not for any reason Joel wanted to explain. “Whose place?”

“Bikinis?” Joel laughed out loud. “It’s the first week of October. Are they crazy?”