Love romances with amnesia in them? If so, RIDE BABY RIDE will be the perfect weekend read for you! 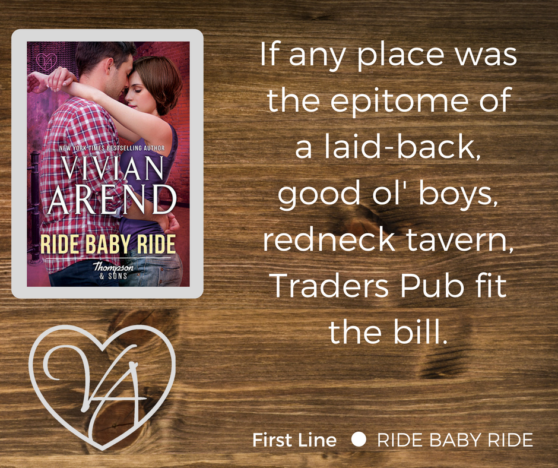 If any place was the epitome of a laid-back, good ol’ boys, redneck tavern, Traders Pub fit the bill. Country music blared over the speakers encouraging those out for the start of the weekend to kick up their heels and let loose.

Familiar sights, all too familiar sounds.

Even more familiar was the ache in Gage Jenick’s gut as Katy Thompson shimmied past, her trim body clad in nothing fancier than a pair of jeans and a western shirt, but he was still damn near drooling.

He deliberately turned his chair away and picked up his beer, the Alberta equivalent of an ostrich burying its head in the sand.

If he didn’t look, she wasn’t really there.

Wasn’t really there, in spite of the sweet apple-blossom scent clinging to her skin that wafted over, like it did during the day while they worked together at her family’s garage. How many times in the past six months had he been in the middle of welding repairs or lugging tires from one rack to another, and found his mouth watering? His head turning involuntarily as she sashayed across the wide concrete space with a question regarding billing or a parts order for one of her brothers working the floor.

He hadn’t always had a hard-on for his best friend’s little sis. For years she’d been Katybug—the tagalong annoyance he’d tolerated for Clay’s sake, and later for the sake of the baking they’d snitch from the kitchen she’d taken possession of when her mom had passed away.

It was like a switch flipped. One day she was this invisible creature, and the next?

He could still vividly picture it—months earlier when he’d stopped work for the day. He’d rounded a corner at the garage in time to see a hose burst on her.

“What the hell?” Gage rushed toward Katy who stood laughing, the broken hose writhing as if it were alive. It only took a minute for him to shut off the water at the source, but that was long enough to end with them both drenched to the skin.

He turned to deliver some timely big-brother-like, smart-ass comment, and got slammed with an eye-opening lightning bolt.

Her shirt was plastered to her, revealing more than any trip to the lake or swimming hole ever had, and to his utter shock, Katybug had hips and breasts.

Nipples he could clearly see pressed to the front of her soaking wet T-shirt because she didn’t appear to be wearing a bra.

Nowadays there is lot of unforeseen circumstance which force humanity to take remedies. You can order medicines directly your office. In these latter days the stock you can find in online pharmacy is actually high. Some medications are as a rule used to treat many types of bacteria, such as tonsillitis and infections of the throat. Other ones are used to treat diabetes. Cialis is a remedy used to treat divers afflictions. What do you have to know about cialis order online? Presently many families search for the exact keyword ordering cialis online on the Internet. Perhaps you already read something about it. Having erectile dysfunction can beyond doubt complicate romance. What can cause erectile dysfunction? A row of psychological issues can produce erectile dysfunction. What should you discuss with a physician before taking Cialis? Any medication may cause dangerous side effects. Sometimes side effects can be actually dangerous. Talk to your pharmacist about the proper disposal of your medicine.