Love a second chance romance? Be sure to pick up Don’t Walk Away! 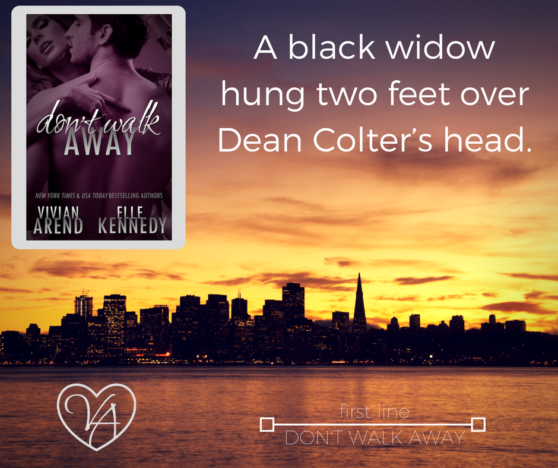 A second one perched on the nearby window seat, legs bouncing as she stalked a new victim.

He stood smack-dab in the middle of freak-house central. Tangled white cobwebs filled the corners of the windows while battery-operated candles cast flickering shadows in sharp contrast with the disco ball sparkles raining down on the dance floor.

The second weekend of October was far too early for Halloween, but one thing Dean knew was when to argue with a female and when to close his damn mouth and put on the costume.

At least his get-up wasn’t something lame like Zorro. Nope, he’d wandered through the private entrance to the warehouse fashionably late to discover he’d been left the makings for Iron Man. Nothing more than leggings and light body armor, his muscles filling out the rest. The symbolism made him grin.

The mask, however, he’d “forgotten” in the back room where he’d found the costume waiting. Screw wearing something that covered his entire face.

He glanced around the noisy room, impressed by the size of the crowd that had appeared after just a few phone calls.

The guy beside him weaved hard to his right, and Dean dodged aside with military precision, catching the man with one arm and tipping him back to vertical with a laugh. “Whoa, there, cowboy.”

The drunken partier’s date giggled loudly, bracing her hands on her hips as she arched her back and presented a well-filled jean vest in Dean’s direction.

“Thankee, pard’ner.” Her interest flashed nearly as bright as the shiny sheriff’s badge pinned over her ample bosom.

“You might want to hog-tie your man for the rest of the night,” Dean suggested, amused as the man’s hands wandered over her curves. “Maybe take away the keys to his horse.”

She stepped between them, chin rising. “You wanna come for a ride with us?”

“Thanks for the offer, but I’m not allowed to mix business with pleasure, darling.” He pretended to tip a hat, then strode off, determined to catch up with his buddies who were somewhere in the mob.

Parker Wilson and Jack Hunter were not only his business partners, but also his best friends. They’d gone through hell together during their Ranger days, but now that their two tours of duty were over, they’d all settled in San Francisco. Even with their time on foreign soil long behind them, they seemed to have little difficulty finding new ways to get in trouble.

A pair of identical Playboy Bunnies sauntered past, eyeing Dean with great enthusiasm. He offered a smile, but kept going without even a second glance at their fluffy tails as he examined the crowd for the rest of his team.

Three steps later he jerked to a halt.

God, he had to be running a fever, or dying…or something. He glanced over his shoulder, but nope. The urge to reverse direction and work on seducing one, or both, of the bunnies into his bed wasn’t there. Maybe his libido had finally succumbed to pure exhaustion from all those other times when he’d jumped in enthusiastically, leaving a trail of satisfied women in his wake.

A burst of familiar laughter rang from the corner where the refreshments were, and Dean changed course, once again struck by how many people were enjoying the haunted house around him.

It wasn’t difficult to spot the rest of his crew once he’d cornered them. Someone with a sense of humor had replicated the entire Avengers team and he was pretty sure with one guess he could name the troublemaker.

“Dean.” His buddy Jack went to extend a hand toward him, jerking to a stop as if surprised to spot the curved bow he held. Amusement filled his dark brown eyes, and he paused to sling the contraption over his shoulder. “About time you got here.”