Feature Friday: Love is a Battlefield

For a limited time, get LOVE IS A BATTLEFIELD on sale for $0.99. 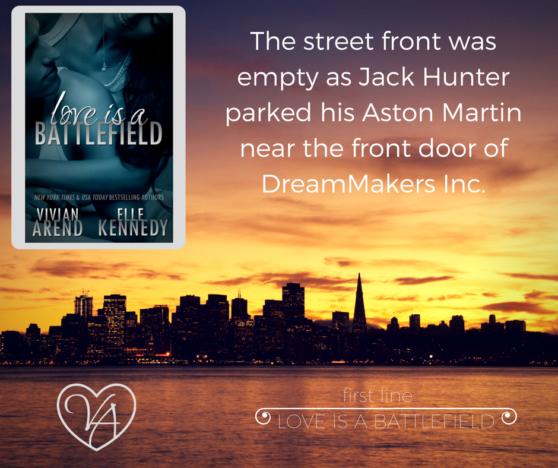 The street front was empty as Jack Hunter parked his Aston Martin near the front door of DreamMakers Inc. The music from the party he’d just left still pulsed in his veins, and he hummed along with the tune stuck on repeat in his brain, clicking open his trunk to pull out the enormous box filled with mostly full bottles of leftover booze.

Normally at the end of a party, remaining stock belonged to the clients who’d purchased it. In this case the party had been for one of their own, which meant the leftovers were going to refill the office liquor cabinet.

Jack grinned. When he and his best friend, Parker Wilson, had established DreamMakers it had been gamble. They’d wanted to capitalize on the skills they’d gained as soldiers while enjoying life to the max. The fact the company had become wildly successful didn’t suck.

He put his shoulder to the door, balancing the heavy box with one arm as he coded in the security key. After years of serving overseas as a Ranger, it felt strange to be home. Still watching his back, and the backs of his partners, only no longer against a foreign danger.

The security system flickered from armed to standby, and he moved quickly to get under shelter as rain began to fall.

Inside the office, he moved rapidly through the darkness, familiar with every inch of space. To his right their secretary’s desk stood vigil near the front door, a half-dozen comfortable waiting chairs lining the wall across from it. Didi had left her radio on low—no matter how many times he and the guys teased her, they couldn’t convince the older woman to shut things off at night. And considering how much work she did, none of the three partners was prepared to call her up on the carpet for something as minor as leaving her music playing night and day.

He shut off the radio, then headed to the staff area at the back of the building, past the center corridor where they each had an office. He and Dean Colter pretended to work in theirs. Parker Wilson actually had a desk and chairs in his office space, his open door revealing impeccable military neatness in every organized inch.

Jack wasn’t so much into the office furniture and filing cabinets. He had a couch. It worked fine for the rare times he was in the building.

DreamMakers organized dates for the people who couldn’t coordinate enthusiastic enough romantic gestures on their own. In the beginning, their work had been one hundred percent reaching out to confused and desperate friends. The guys who needed some major groveling to get themselves off their ladies’ shit-lists, but over the past three years the company’s reputation had grown.

It wasn’t just about getting their fellow man out of trouble anymore. Now they helped anyone who needed some direction in planning a romantic date or kickass celebration.

Jack paced the hallway, the sneakers he’d changed into after leaving the party landing silently on the laminate flooring. He made it all the way to the staff room/kitchen area and froze.

A light shone by the sink. That in itself wasn’t enough to make him blink. No, it was the light and the dusty backpack lying on the counter that shoved his suspicions into high gear.

He set the box in his hands on the floor, checking around carefully as he reached for the corner cupboard and silently pulled out the gun stashed there. Didi constantly teased the men about the strategically placed weapons in the office, and their reply was always the same—Rangers for life. You could take the man outta the army, but you couldn’t take the army outta the man.

Gun in hand, Jack eased into the corner to prepare himself for anything.A quick peek behind the freestanding barrier by the back exit revealed a worn pair of shoes left outside the bathroom door.

Someone appeared to have entered the building, and unless they were currently strolling the streets of San Francisco in bare feet, they had to still be around. And from the size of the shoes, his mystery person was a whole lot smaller than him.

He’d already seen into all but three of the rooms, and one of those was rapidly eliminated as Jack cautiously poked his head around the corner to discover an empty bathroom.

The towel hanging on the rack was still damp, but other than that there was no sign of his intruder. Which left one of two places.

He paced silently down the hall to stand outside Dean’s office, cocking his head toward the door. Nothing. Nothing but silence so thick it made his ears buzz. He was reaching for the doorknob when a low murmur jerked him from his task.

Someone in the building, less than ten feet away. Somewhere behind the door that led to Jack’s domain.