Who loves a sexy wolf shifter? Check out Shawn in BLACK GOLD! 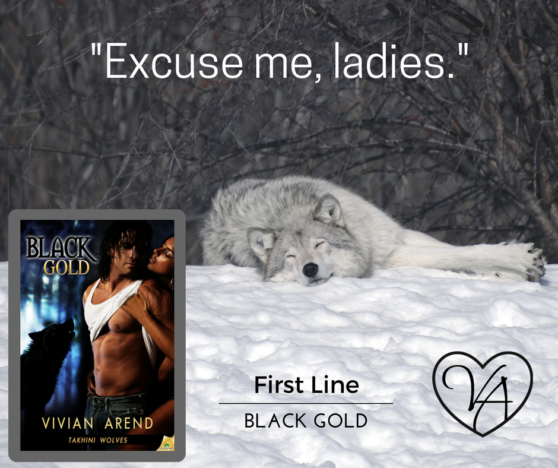 Shaun ducked in front of a table of laughing women and caught the flying beer mug in mid-air before it could slam into the center of their party. Unfortunately, there was no time to respond with more than a wink to their admiring feminine responses. He twirled to grab the nearest bear shifter by the scruff of the neck, hauled him away from the innocent bystanders and thumped him face-first into the rustic wood-paneled wall. Another glass shattered inches to Shaun’s right, and he sighed.

Bloody den buddies. Wolves might drive him crazy, but after a few too many drinks bears were even worse. Should have cut them off hours ago and sent them all packing.

“Let me know if you need a hand,” Evan called from behind the bar, amusement tingeing his voice.

“Fuck off,” Shaun tossed back easily. Just what he needed—an Alpha with an attitude. Not.

Evan laughed as he reached over the counter and nabbed the nearest two troublemakers by the hair. He knocked their heads together and grinned with satisfaction as the shifters tumbled to the floor.

Shaun pulled his current object of attention off the wall a foot or so, examined the man’s eyes carefully, then slammed him back harder than the time before. The bear shifter went limp and puddled downward without a sound. Shaun turned to the remaining crew of shaggy-headed rabble-rousers currently making Tuesday afternoon in Whitehorse a little too exciting for the locals.

Of course, at this time of day the only occupants of the Moonshine Pub were shifters, and for the most part, they weren’t as picky about how wild the party got.

Shaun flipped the visiting wolves the finger. Figured they’d sit and observe the chaos instead of offering to help. This wasn’t their territory, so he couldn’t blame them for staying out of it. And with Whitehorse in the strange position of having two packs sharing territory—sometimes not getting mixed up in local werewolf politics was the safest way to keep your fur intact.

He took a swift survey of the bar, noting only four grizzly shifters remained standing. Well, three standing, one swaying violently as he attempted to chug the remaining half pint of beer in his mug and keep an eye on Shaun.

Talk about not taking matters seriously. For some reason the big brute’s lack of concentration pissed Shaun off. He shook his hands at the man like an irate Italian. “Hey, you. Put the glass down and let’s see some effort here. Sheesh, what kind of barroom brawl is this?”

His opponents exchanged glances, and Shaun cracked his knuckles in anticipation. Finally he’d get to inflict a little bodily damage. Not that he had anything against bears personally—it had simply been too long since he’d let off some steam.

One bear rushed him. Shaun sidestepped, turning with his elbow raised high and hard, connecting with a satisfying thunk to the idiot’s head. The second swung at him as the third lunged forward. Shaun seized the ham-sized fist on his right as it approached, pulled the man off balance and into the direct line of the dive-bombing attack of his buddy. The two connected with grunts of pain, tangling together to land in a twisted mess on the floor.

Nowadays there is lot of unforeseen circumstance which force men to take remedies. You can order medicines directly your office. In these latter days the stock you can find in online pharmacy is actually high. Some medications are as a rule used to treat many types of bacteria, such as tonsillitis and infections of the throat. Other ones are used to treat diabetes. Cialis is a remedy used to treat divers afflictions. What do you have to know about cialis order online? Presently many families search for the exact keyword ordering cialis online on the Internet. Perhaps you already read something about it. Having erectile dysfunction can beyond doubt complicate romance. What can cause erectile malfunction? A row of psychological issues can produce erectile dysfunction. What should you discuss with a physician before taking Cialis? Any treatment may cause dangerous side effects. Sometimes side effects can be actually dangerous. Talk to your pharmacist about the proper disposal of your remedy.