Be sure to pick up ALL FIRED UP, the first book from the DreamMakers series, co-written with Elle Kennedy, for FREE. It’s free for a limited time. 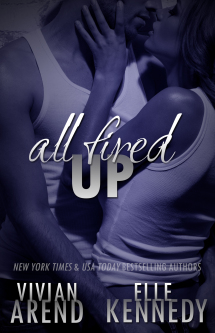 “How long have you been together?” he asked briskly.

Dean’s dark eyebrows shot up. “And you’re already planning on popping the question? You must really believe she’s the one, huh?”

Phil offered a blank stare. “What?”

“The one,” Dean echoed. “The woman of your dreams, the fabled Mrs. Shotelle, your one and only, etcetera, etcetera.”

It took all of Parker’s willpower not to gape at the moron sitting in front of them. “Yeah, sure, she’s the one” was about the most half-assed response he’d ever heard in his life. He didn’t normally root against his clients, but damn, he found himself hoping Phil’s main squeeze rejected the proposal. He didn’t know this Lynn, but he already felt pretty fucking sorry for her.

“So, what does she enjoy?” Parker asked. “What are her hobbies?”

He smothered a sigh. “What about favorites? Favorite color, movie, music?”

Oh, for fuck’s sake. The man was about to propose to the woman and he couldn’t even name her favorite color?

“You know what,” Dean spoke up, “why don’t you take a few minutes to think about it? We’ll need you to fill out some forms anyway, including a questionnaire about your woman. And there’s also a couple of waivers you’ll need to sign.”

“Standard 374-9. Release of liability for performance of services. Then we have the 17-4 regarding transportation.”

Phil’s eyes glazed over as Dean rambled on, spewing a list of numbers and techno jargon that sounded damn impressive. When Dean stopped and flashed his grin, Parker covered his mouth with a hand to hide his amusement behind a cough.

“I beg your pardon?” Phil blinked a few times. “Release of liability?”

Dean cleared his throat. “Means you acknowledge and understand that while we’re planning the date, it’s your job to woo your woman. If it’s a proposal, we can’t guarantee she’ll say yes, and we won’t be held liable if the answer is no.”

“Just head to the lobby and ask Didi for the paperwork, and you can take as long as you need with it. We’ll talk fees and ideas when you’re done,” Dean added.

A moment later, the heavy oak door closed behind him, leaving Parker and Dean alone in the office.