BABY, BE MINE Feature

We’re closing in on the final book in the Thompson & Sons series, and to make sure you’re caught up, we’re going to go through the books that lead up to the new story. A WILD RIDE can be read alone, but it’s better for being a part of the whole!

Feature: BABY, BE MINE 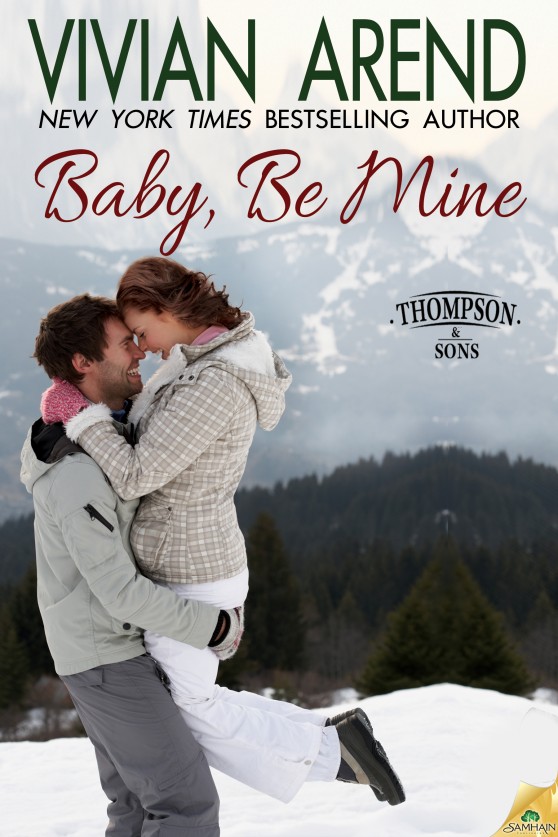 What the mind forgets, the heart remembers.

Since the moment Katy Thompson transformed from annoying tagalong to desirable woman, Gage Jenick has awaited his chance. When she kicks her boyfriend to the curb, he doesn’t hold back—in spite of the next day work assignment that will take him completely off the grid for two long months.

After a head injury sustained on a storm-swept road, Katy can’t remember her own email password, much less how the little pink “positive” on the pregnancy stick got there. Barring an influx of midichlorians, she’s at a loss to explain what happened, or when…or with whom.

Suddenly Gage is back in her life as if he has a right to be there. While she vividly remembers the crush she had on him, she’s no one’s charity case. But another thing she’d forgotten was just how stubborn Gage can be—especially when her domineering ex tries to stake a claim…

Warning: An unforgettable night that gets forgotten. A crazy redneck ex, and a hero who’s ready to take on the world, and his past, for his heroine.

The entire drive he daydreamed about where he’d find her. Timing-wise she should be at home, so he ignored his own place, and the garage, and took the back loop. The sight of her car in the drive made his heart leap, and he parked in the second snow-free space in a rush, damn near leaping from the truck. Somehow he forced his feet to a walk instead of rushing her front door and bursting in like a maniac.

He rang the doorbell.

It might be rude, but he even leaned over and peered in the window, to see if she was around. A pair of winter boots lay haphazardly under the hall coat rack, a small puddle of water pooled under the soles. Her coat was there—only no sign of her.

He moved to knock a second time but was interrupted by Katy’s less-than-ladylike cussing. Gage tried the front door, and it opened easily.

“Katy? You here?” Both feet still on the outside stoop, he stuck his head around the doorframe to make himself heard.

A new set of sounds greeted him, less amusing than the curses. Retching and coughing, and Gage couldn’t stand it any longer. He stormed forward and headed toward the bathroom.

She was seated on the floor, her cheek resting on one arm as she basically clung to the toilet. Her eyes were closed, and her face twisted in a grimace as she shuddered then leaned forward and spat.

Or that’s what Gage intended to say. He got out the Oh hell part before Katy’s eyes flew open and her gaze landed on him, all traces of nausea and exhaustion vanishing as she opened her mouth and screamed. She scrambled to her feet, hands flailing, a riot of noise and motion.

He ducked away from the toilet plunger she’d swung like a sword. At the same time he examined her quickly—noting her pale skin. The dark shadows under her eyes.

The business end of the plunger wavered in front of him as he took in her extremely short-cropped hair, the dark strands that usually would have covered her shoulders only about an inch long over her entire head. It was a radical change from before. Kinda cute, really, but unexpected.

“Gage?” She squinted, her head tilting to the side and making her rather adorable. Well, adorable if she weren’t still threatening him with a toilet cleaner.

He took hold of the handle and tugged the shaft from her fingers, putting the weapon back in its place. “Yes, Gage.”

He laughed, then caught her as she swayed. “And you must be running a fever or something.”

She squirmed out of his arms and backed away slowly. “No fever. My stomach’s upset. Feels better now.” She looked him up and down quickly. “You’re missing your surprise party.”

Utter dread joined the disappointment in his gut. That was the last thing he wanted tonight. “Don’t tell me there are people over at my house.”

Katy nodded then gestured toward the bathroom door. “Umm, if you don’t mind. I need to brush my teeth. And stuff.”

Of course she did. “You sure you feel okay?”

“Yeah.” She waved him out, frowning as if confused.

Nowadays there is lot of unforeseen circumstance which force folk to take remedies. You can order medicines directly your office. In these latter days the stock you can find in online pharmacy is actually high. Some medications are as a rule used to treat many types of bacteria, such as tonsillitis and infections of the throat. Other ones are used to treat diabetes. Cialis is a remedy used to treat divers afflictions. What do you have to know about cialis order online? Presently many families search for the exact keyword ordering cialis online on the Internet. Perhaps you already read something about it. Having erectile malfunction can beyond doubt complicate romance. What can cause erectile disfunction? A row of psychological issues can produce erectile dysfunction. What should you discuss with a physician before taking Cialis? Any medication may cause dangerous side effects. Sometimes side effects can be actually dangerous. Talk to your pharmacist about the proper disposal of your remedy.