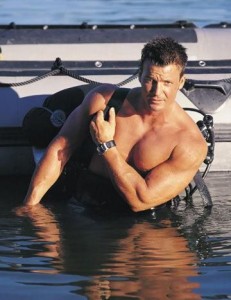 I haven’t done this for a while- it seems!

Current wip is Whirlpool, bk 2 in the Forces of Nature. Here’s a little rough tidbit from a diving scene.

They descended into the quiet blue of the ocean, the sounds not silenced, but muted. Changed into noises of air bubbles, even breathing. The rush of blood through his own veins. Thomas motioned to him and they kicked together toward the intact skeleton of a sunken vessel.

Colorful fish darted around them, flashing in schools away and then back as they passed coral ridges. Jamie slowed to touch a delicate arch forming between two ridges of rock, the minute creatures turning the ocean’s floor into a gallery of art all painted with streaks of sunlight from above.

Jamie’s watch beeped, and he glanced at it in surprise.

Time had passed without him being aware, caught up in fascination with the wreck, with the objects scattered over the ocean floor. Somehow Jaffrey’s Cove had managed to keep the treasures there, visible and yet preserved for all time for the select few who braved the journey to the ocean’s floor.

The three of them turned and head toward the shore, toward where the towering cliff plummeted to be swallowed by the surf. Here below the surface the crash was a constant buzz, and the tug of the tidal current like the embrace of a lover, cradling him and directing his path.

The entrance to the cave was glorious, the stone worn smooth by eons of millennium. Above them the roof hung in a solemn arc, guarding the surface of the water from the sky, keeping the colors more muted and monochromatic now that they passed out of the direct sunlight. They followed the right wall toward the back, the easy rhythm of his breathing calming his excited nerves. Jamie loved this part. Being underwater, seeing a world that so few people had experienced to it’s fullest. Sailing or gliding along the surface was one thrill, but moving beneath the waves, exploring the dwelling places of creatures that lived for years in a constantly moving environment…

It never ceased to amaze him.

A soft touch on his arm brought his attention to the others. The two of them signaled to the back section and motioned they were ready to enter the cave system. Jamie checked his tank air levels, just to be sure. Spelunking underwater was a far more dangerous than regular diving, the closeness of the walls and the current making every move far more considered.

The adrenaline rush was just what he wanted right now.

They set off together, rounding the first corners with ease, the width of the cave wide enough for them to pass through three abreast. Soft white sand lined the passage floor, and he could imagine at low tide the stories of pirates dragging their chests back into the cave would have entertained the imagination of many, both young and old.

Slowly the passage narrowed and Braden took the lead, guiding them through the eerie half darkness that grew deeper the farther they moved in. Jamie adjusted his headlamp; opening the focus of the beam to shine the light into the more distance reaches. He kicked lazily, the flippers propelling him in easy motion after the big man in front of him. The passage narrowed again and Jamie swallowed hard. The promise of the sights ahead pulled him along and gave him courage to proceed, just a little farther, just one more bend.

And then they were there.

A beam of light shone from somewhere above, cutting through the glittering surface and turning into a million sparkles of light. Luminescent algae and starfish of every color and size clung everywhere. A sunstar with over twenty-four legs decorated the near sidewall and Jamie stopped to run a gentle caress over the rigid bumps and prominences on the creatures limbs. There were few of the colorful fish in the cavern, but many crabs that darted back under rocky ledges. Jamie smiled as an eel bared razor sharp teeth in his direction when he ventured too close to its hiding hole.

Paradise, an Eden hidden below the waves.

Nowadays there is lot of unforeseen circumstance which force folk to take remedies. You can order medicines directly your office. In these latter days the stock you can find in online pharmacy is actually high. Some medications are as a rule used to treat many types of bacteria, such as tonsillitis and infections of the throat. Other ones are used to treat diabetes. Cialis is a remedy used to treat divers afflictions. What do you have to know about cialis order online? Presently many families search for the exact keyword ordering cialis online on the Internet. Perhaps you already read something about it. Having erectile malfunction can beyond doubt complicate romance. What can cause erectile dysfunction? A row of psychological issues can produce erectile disfunction. What should you discuss with a physician before taking Cialis? Any medication may cause dangerous side effects. Sometimes side effects can be actually dangerous. Talk to your pharmacist about the proper disposal of your drug.

Wow! I’m looking forward to this one. Tidal Wave was great.

Thanks Lisa. I’m still struggling a bit, but I do like my merfolk. I LOVE the ocean!