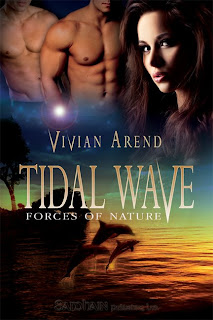 Alexia wondered briefly what she was doing in Anthony’s arms while Joshua wandered the room behind them. It was so different from anything she’d experienced before, the need welling from deep within calling her to keep these two men at her side. More than called, demanded. She longed for Joshua, a heady all-out desire that shocked her to the core, but she wanted Anthony as well. Alexia had never been one to fool around indiscriminately, always keeping sex in the context of long-term relationships. But there was no denying the urges sweeping through her now, harder and hotter than she’d experienced before.

It had to be something to do with the medallion, with the dolphins.

Did she want to be out of control like this? She’d accepted the medallion as a gift from her Gram. A trinket. Not some life-changing “now you are one of us” commitment. Yet here she stood in Anthony’s arms. Her hand throbbed from the smack she’d delivered to Michael’s face. Her body tingled from head to toe with the need for…something.

Kissing Anthony felt right. Sweet, tender kisses that turned her inside out. Anthony’s touch teased. Tentative at first, his lips on hers like a brush of the ocean on the shore at its very calmest. She stroked his lips with her tongue, and he drew a hand around her neck to adjust the angle of their mouths to bring them closer together. He nibbled on her lips, along her cheek to the V of her neckline and a shiver ran through her. Anthony was softness and intimate caring.

Then Joshua returned and the heat skyrocketed. Twisting her in his cousin’s arms Joshua took possession of her mouth and controlled her. Tongues met, teeth bit. This was what she’d been longing for and she urged him on, her lips hot and moist on his. She wrapped an arm around his neck to lock him in place, the fingers of her other hand still tangled with Anthony’s.

Three bodies close together, the rough fabric of their jeans brushed the bare skin of her legs and made her want more of their touch everywhere. Joshua’s hands held her hips firmly to his groin, his erection a hard ridge against her belly.

Anthony nipped the back of her neck, then lapped to soothe the pain away. He pulled the zipper on her dress inch by inch to release the garment from her body. A trail of kisses flowed downward, laving her bare skin with his tongue.

“She’s not wearing a bra,” Anthony whispered in awe as a finger brushed softly over the exposed skin of her back.

Joshua pulled away and Alexia restrained herself from following him, chasing his addictive taste. His hands pushed the straps of her dress aside and the top pooled around her hips. Anthony stroked her shoulders and down the curve of her breasts. He cradled her in his palms, lifting the firm globes to Joshua like an offering. The heat of Joshua’s stare hit her full on, and she forced her eyes shut to avoid going up in flames.

Then she was covered with caresses as her dress was lowered to the floor, and lips and hands touched her body again and again. She didn’t know who kissed her neck, didn’t care who caressed her breast. Skin to skin, moist kisses after searing hot touches. One of them flicked the pearled tip of her nipple, and her womb flooded with moisture.

“We want you, Alexia. All of you,” Joshua said before his tongue slid along the edge of her soaking wet undies. She opened her legs voluntarily, wanting more. Offering more. He pressed a kiss to her heated core, his teeth snagging on the fabric covering her. Hot breath on hot moisture combined and whirled together into a flammable danger zone. He leaned in harder with his lips, licking the length of her slit over her panties and she shivered.

Take them off, please.

She wanted his mouth on her, no barriers. Joshua sucked the fabric again, the crotch sopping wet between her juices and his mouth. Alexia tilted her hips, attempting to make him touch her more intimately, and he laughed. His hands traced over her thighs, thumbs rubbing along the inside toward her tender core. He pushed into the material, his fingers probing her pussy ever so slightly.

“Oh sweet mercy,” Alexia moaned. It was torment, the lightness of his touch on super-sensitized tissues.

Her panties slid away, and she rocked on suddenly shaky legs until Joshua’s hands steadied her. One hand reached behind her to clasp her ass, his fingers dipped into the crease between her cheeks. The other stroked her slit, fingers dragging through the moisture to settle where her clit pulsed in time with her heart.

Then his mouth descended and his tongue claimed her again.

Coming to an ocean near you July 21st.

Nowadays there is lot of unforeseen circumstance which force people to take remedies. You can order medicines directly your office. In these latter days the stock you can find in online pharmacy is actually high. Some medications are as a rule used to treat many types of bacteria, such as tonsillitis and infections of the throat. Other ones are used to treat diabetes. Cialis is a remedy used to treat divers afflictions. What do you have to know about cialis order online? Presently many families search for the exact keyword ordering cialis online on the Internet. Perhaps you already read something about it. Having erectile malfunction can beyond doubt complicate romance. What can cause erectile malfunction? A row of psychological issues can produce erectile disfunction. What should you discuss with a physician before taking Cialis? Any medication may cause dangerous side effects. Sometimes side effects can be actually dangerous. Talk to your pharmacist about the proper disposal of your remedy.

Oh My!!! what a tasty snippet.

Thanks Heather- it's a verry verry hot book.

Good thing they have that ocean near by :wink: