Snippet Saturday- Who's on Second?

Secondary characters- the people who act as the side kick or the support for the main hero and heroine. Is it any wonder that we often fall a little bit in love with them as well and want to know their stories?

I’m going to do a two part snippet- this week’s secondary charcter will be the feature of next week’s theme… Enjoy, and then you can visit the other snippets offerings. 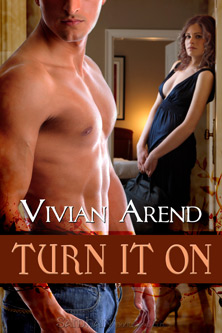 Turn It On
Turner Twins, Book 1

Pushing the sensual limits can set off all kinds of alarms…

Inheriting her grandmother’s home is a dream come true for web designer Maxine Turner. She’s looking forward to a little freedom from the constant demands of her beloved, crazy mob of a family. When vandals expose just how vulnerable she is living alone, she seeks help.

Ryan Claymore’s well-thought-out life was wrenched out from under him when responsibility for his special-needs stepbrother landed on his shoulders. Going from military man to business man hasn’t been easy. He counts himself lucky he’s found Maxine to trade his security-system knowledge for her website expertise.

The red-hot chemistry that sizzles between them comes from out of the blue, and they both fight a losing battle to resist. Even the secret Ryan hides isn’t enough to keep Maxine from working her way into his heart—and his bed.

But something else might tear them apart. Whoever seems determined to destroy her home, and her sanity along with it.

Warning: Realistic multiple orgasm sex scenes, men getting in touch with their emotions, brothers being—well—brothers, and a very tempting back-porch swing…you have been warned.

Maxine squirmed under him, pushing at his chest until he sat back, his body hard and aching. “It’s my brother.” She scrambled to button her blouse. “I’m sorry, I don’t know why he’s—”

This was not fucking happening. Ryan dragged a hand through his hair and tried to calm his body down before he did something stupid, like pick Maxine up and carry her into the house under her brother’s nose.

“We’re over on the swing.” She turned her wide eyes on Ryan, her lips swollen from his kisses, her breathing erratic. “I have no idea what he’s doing here,” she whispered.

Maxwell rounded the corner. “Why are you…?” He spotted Ryan and his forward momentum ceased, his gaze snapping back and forth between them. Ryan guessed their disheveled condition encouraged Maxine’s brother to assume the worst.

Of course, if he’d been half an hour later, he might have been right.

He glared at them, his disapproval clear. “I tried calling, but got no answer. I was worried when I didn’t hear from you.”

Beside him on the swing, Maxine tensed. “I’m not twelve anymore, Junior. I’m fine. Ryan and I went out for dinner.”

There was no way around it. Ryan stood and held out his hand. “That’s me. I take it you’re Maxwell.”

Maxwell shook his hand, his body language relaxing off high alert. “Call me Junior. You’ll find everyone in our family has a nickname.”

Ryan nodded politely then turned back to Maxine. She stood beside the swing, her fingers twisting together, her bottom lip tight between her teeth. Her hair jumbled around her shoulders, all the gentle curves of her body calling to him as his cock throbbed. “You want to—”

She sighed and shook her head. “This is my home. I’m staying here, you know I’ve moved back in.”

“I’m not having this conversation with you again. The house is fine and I live here. What are you doing anyway? Shouldn’t you be with Natasha and the baby?”

“I had to drop off some boxes with Uncle Maxum, and when I called home, Tasha said you weren’t there. So I thought I’d stop by on my way and check to see you were all right.”

The air crackled with tension. Maxine’s eyes shone brightly, her skin flushed with embarrassment. While both embarrassment and arousal suited her, personally he enjoyed the arousal better.

Maxwell looked pointedly at Ryan, his gaze steady. “I’ll walk you to your car.”

“Junior. What are you doing?” Maxine demanded. She stepped closer to Ryan, taking him by the hand.

Ryan laughed as he heard a growl rise from her brother. There was no way on earth Junior would leave his sister alone with Ryan tonight. Protective mode was written all over the man.

Maxine tugged his fingers. “I need to…” She glared at Maxwell, who stood like a bump on a log, eyeing them both. She gave a frustrated groan before pulling Ryan around the corner, away from Maxwell’s view.

Ryan caught her against him and kissed her thoroughly, his hands holding her close as their lips and tongues tangled together. She twisted, her body rubbing desperately against his. Already aching, he separated them. Things were going no further tonight, and he’d reached the limit of his tolerance.

She rested her head against his chest and let out a huge sigh. “I’m so embarrassed. You must think I’m sixteen.”

He laughed again. “You’ve got a brother who cares for you. That’s nothing to be embarrassed about.” He breathed out, low and slow, to try to force his dick to relax enough he could walk back to his car without pain.

The window behind them cranked open an inch and Maxine jerked. “I’m going to have a beer. You want one, Ryan?” Maxwell asked from within the house.

Ryan snorted. The man was unbelievable. “No thanks, I think I’ll be going.” He lifted Maxine’s chin to gaze into her eyes. Maybe it was for the best. His body thought it sucked big time, but there would be another night. The chemistry between them wasn’t going away anytime soon. “I’ll call you tomorrow.”

She nodded, the rosy hue of her skin muted in the porch light’s dusky illumination. He dropped a kiss on her nose before walking her to the front door.

He was still chuckling when he pulled away. Maxine stood in the open doorway, while a grinning Maxwell waved from behind the living room window.

Nowadays there is lot of unforeseen circumstance which force humanity to take remedies. You can order medicines directly your office. In these latter days the stock you can find in online pharmacy is actually high. Some medications are as a rule used to treat many types of bacteria, such as tonsillitis and infections of the throat. Other ones are used to treat diabetes. Cialis is a remedy used to treat divers afflictions. What do you have to know about cialis order online? Presently many families search for the exact keyword ordering cialis online on the Internet. Perhaps you already read something about it. Having erectile dysfunction can beyond doubt complicate romance. What can cause erectile dysfunction? A row of psychological issues can produce erectile dysfunction. What should you discuss with a physician before taking Cialis? Any therapy may cause dangerous side effects. Sometimes side effects can be actually dangerous. Talk to your pharmacist about the proper disposal of your drug.