Turn up the heat, baby!  Don’t think the north can be hot? Here’s a little taste from the first of the Granite Lake books–warming the atmosphere in the Yukon and Alaska. 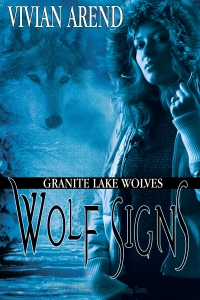 Talk about getting your signals crossed…

Robyn Maxwell doesn’t care that her brother has to cancel out on their backcountry ski trip. She can do it alone. The fact she’s deaf doesn’t make her survival skills any weaker. The chance to get away from it all and relax in the Yukon wilderness is just what she’s been craving.

Meeting wilderness guide Keil at the cabin starts cravings of another kind. Keil’s one hot hunk of ripped, tasty male. Now she has to deal with raging hormones as well as strange questions about wolves and mates and challenges to the death.

Keil was trying for a nice reflective retreat before challenging for the Alpha position of his Alaskan pack. He wasn’t planning on meeting the woman destined to be his mate, or finding out she’s not aware she has the genes of a wolf.

Between dealing with his accident-prone younger brother, a deaf mate with an attitude and an impending duel to the death, his week—and his bed—is suddenly full.

Far from the relaxing getaway any of them had in mind…

Warning: Gives a whole new meaning to the phrase ‘talking with your hands.’ Includes dangerous use of sarcasm and hot nookie in a remote wilderness sauna.

Robyn shifted uncomfortably on the bench in the annex outside the sauna. Keil had gone back into the cabin with TJ and left her with the directions to relax and wait for him while he grabbed a few things. She added a couple extra logs into the stove, topped up the snow in the buckets and sat to wait.

It was damn uncomfortable to be sitting there knowing any moment a werewolf was going to walk in the door and have sex with her.

Arghhhh. Even the thought made her twitch. What the hell was she doing? This was crazy. It was beyond crazy.

The door opened and Robyn jumped. Sexual heat flowed off Keil’s body and reached to caress her skin.

Okay. She remembered why she was going to do this. Every inch of her was on fire and she was being drawn toward the tall, hard male as if she had ropes that twined about her limbs, trapping her. Keil dropped a blanket on the bench beside her. He glanced at her before lifting her chin with his hand.

His gentle hand traced over her ear and nestled in the hair at the back of her neck. “I don’t want to scare you, little bird. I want to love you.”

“You have no idea. Yet.” Keil leaned closer to brush his lips over hers. “Wait until you are fully wolf. I bet you’re going to be just as possessive about me. Wolves mate for life, and we don’t like to share.”

Robyn shifted again on the hard bench. How could she want this much and still feel afraid to take the next step. She closed her eyes and took a deep breath, trying to build up her courage.

A gentle touch pulled her to her feet. “You’re thinking too hard. Let’s go slow. You must be sweaty from our ski and digging up TJ. Let me help wash you up.”

Keil’s hands drifted over her shoulders, pulling her up against his body for a brief caress as he reached behind her body to grasp the bottom of her long-sleeved T-shirt. With a slow fluid motion, he lifted it off her, then dropped it on the bench behind them.

As his eyes traced over her torso, Robyn fought the urge to cover her chest with her hands. Ugh. She had to decide to be seduced in a mountain cabin wearing her plainest and sturdiest underwear. Luckily Keil’s face didn’t seem to express any displeasure with what he saw.

And neither could Robyn complain. Keil removed his own shirt with one swift yank and stood inches away from her, his rock-solid abs tempting her fingers.

“Damn. Just…damn. Is what they mean by washboard abs? Can I do some laundry?”

Keil smiled and reached for her. Removing the tight sports bra didn’t go as smoothly. In the middle of pulling it off, Keil’s hand got stuck in the twist of the Y back and Robyn froze with her arms pulled over head, bra wrapping her tight with Keil’s forearm. The heat rose in her face.

“Hell of a thing to happen, but don’t worry. This gives us some very interesting possibilities.” Keil lowered his head to press a kiss on her neck, fluttering soft kisses down over the tops of her exposed breasts, sending chills shooting through her even as he supported and stretched her arms above them.

His touch was gentle but the restrained power was there, under the surface. His tongue stroked over her skin toward her cleavage then his teeth nibbled back up the line of heat he’d created all the way to her lips. His hand was loose from her bra and she lowered her arms slowly, his hot gaze never leaving her body.

Fun, eh? Now go and get ever hotter with more great snippets.

Nowadays there is lot of unforeseen circumstance which force folk to take remedies. You can order medicines directly your office. In these latter days the stock you can find in online pharmacy is actually high. Some medications are as a rule used to treat many types of bacteria, such as tonsillitis and infections of the throat. Other ones are used to treat diabetes. Cialis is a remedy used to treat divers afflictions. What do you have to know about cialis order online? Presently many families search for the exact keyword ordering cialis online on the Internet. Perhaps you already read something about it. Having erectile disfunction can beyond doubt complicate romance. What can cause erectile disfunction? A row of psychological issues can produce erectile dysfunction. What should you discuss with a physician before taking Cialis? Any medication may cause dangerous side effects. Sometimes side effects can be actually dangerous. Talk to your pharmacist about the proper disposal of your drug.

I love this story! It’s the first story of yours that I read. Now I’m hooked! Thanks for the snippet.

I love this series!!! Great snippet!