Who wants to see the first line from ROCKY MOUNTAIN HEAT? 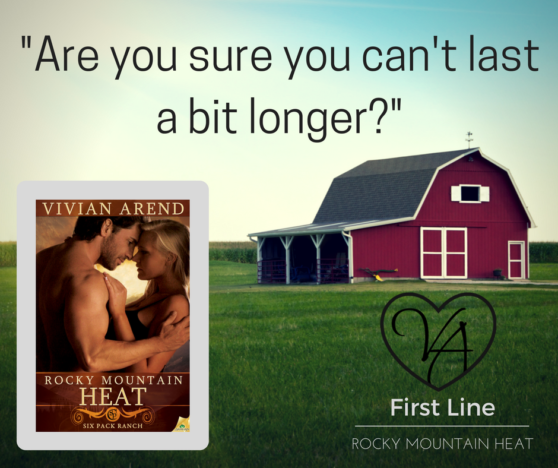 “Are you sure you can’t last a bit longer?” Travis looked away, but not before she’d spotted the disappointment in his eyes. The annoyance.

Jaxi leaned her temple against the wooden boards of the pen, fighting to keep herself vertical. The familiar scent of farm animals did nothing to ease the swirling pain. She felt like the bottom of a horse stall and faking her way through any more of the day was impossible. “I’m sorry. I have to go home now,” she pleaded.

“We bought tickets for the grandstand show tonight and—”

“Why are you two still here? I thought you’d headed back to the fairgrounds. All our livestock showings are done.” Blake Coleman’s deep voice cut through the pounding to soothe her aching head. She opened her eyes a crack to peer up at him.

People wandered past, admiring the animals on display in the livestock pavilion of the Stampede grounds. Watching the rodeo and chuck-wagon races kept many of the visitors entertained, but a good crowd remained here in the quiet of the barns, far away from the roar of the midway rides. A low murmur of voices and the contented sounds of animals filled the oversized building. All of that faded into the background as she focused on Blake’s strong jaw and concerned gaze.

“Ahhh, Jaxi’s being a wuss and wants to cut out early,” Travis bitched.

“Jaxi? A wuss? Get real.” Blake tugged her arm to bring her to his side. His hand rose to her forehead and she caught her breath.

In spite of the lingering sensation of being kicked by a mule, his touch had its usual effect. The tingling in her limbs had nothing to do with the fever consuming her. She dropped her gaze and bit her lip. He wasn’t supposed to affect her this way. Going out with Travis put big brother Blake firmly off limits.

“Damn, you’re burning hot. Jaxi, why didn’t you mention you weren’t feeling well? You guys could have done the Stampede another time. Last day isn’t until Sunday.” A crease folded between his eyes.

“Travis wanted to come today and so did his buddies. I was fine until after lunch. I guess I should have stayed home.” Jaxi wrapped her arms tighter to contain the shivers that threatened to surface. She drew farther from Blake’s body and the temptation to lean into him, let him hold her close.

“Travis will take you home in my truck and I’ll drive the others later,” Blake offered.

“I want to stay for the show. All my friends are here and I don’t want to leave…” Travis’s voice trailed off. Blake had slipped him a head nod, indicating he wanted a private conversation.

Jaxi sat on a nearby bale of hay, holding as motionless as possible in the hopes the world would stop spinning. Their voices went quiet but remained clear even as Blake dragged Travis away from her down the length of the main barn of the exhibition grounds.

“She’s your girlfriend and she’s sick. I’d think you’d want to get her home safely instead of taking off to hang with your friends. Come on, Travis, do the right thing for a frickin’ change.”

“Hell, Blake, it’s just…this is the first time in a long while some of my buds have made the Stampede.”

“Not good enough. Any better reason to leave her high and dry?”

“Fuck you.” There was a pause, then she barely heard the rest. Travis dropped his volume to a whisper. “Things ain’t been so hot with Jaxi lately and, well, I planned on breaking up with her sometime soon. So it would be a damn pain in the ass to leave when everyone else is sticking around having a good time. I’ll just go home alone and end up with blue balls again anyway.”

Jaxi bit her lip. So, the other shoe dropped. Travis had reached his limit of her not putting out for him, even though she’d willingly played his games.

Nowadays there is lot of unforeseen circumstance which force humanity to take remedies. You can order medicines directly your office. In these latter days the stock you can find in online pharmacy is actually high. Some medications are as a rule used to treat many types of bacteria, such as tonsillitis and infections of the throat. Other ones are used to treat diabetes. Cialis is a remedy used to treat divers afflictions. What do you have to know about cialis order online? Presently many families search for the exact keyword ordering cialis online on the Internet. Perhaps you already read something about it. Having erectile dysfunction can beyond doubt complicate romance. What can cause erectile dysfunction? A row of psychological issues can produce erectile dysfunction. What should you discuss with a physician before taking Cialis? Any medication may cause dangerous side effects. Sometimes side effects can be actually dangerous. Talk to your pharmacist about the proper disposal of your drug.