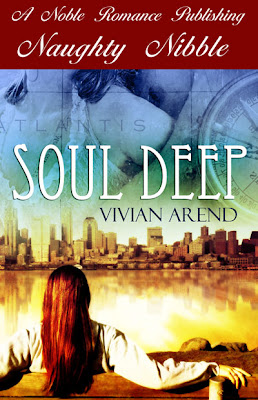 I’m excited to announce I’ve joined my good friend Rhian Cahill at Noble Publishing. Rhian’s One Night in Bangkok came out earlier this year, and now my second published work is out as well! This was a fun little story to write, and I’m tempted to return to this couple and add the next adventure to their tale.

Waiting for his life partner has been difficult. Convincing her that she’s a part of an ancient Atlantis coupling is going to be harder. Luckily, Dylan Finbar’s had plenty of time to develop the patience and the persistence to outlast her protests.

Rachel Hart’s as mesmerized by the young visiting history professor as the rest of the student population. Only, she’s the one that makes his heart complete. Anam Seis, Soul Mates. Can she accept that the attraction between them has been centuries in the making and her potential lover wants not only her body but her soul?

Rachel paused to grab an assignment CD from the side table before leaving the theater and found herself face-to-face with the professor. He smiled directly at her. Her cheeks flushed hot as she realized he’d caught her gawking earlier like one of the fawning groupies.

“Wait, Ms. Hart,” he said as she reached for a disc. “In light of the last assignment you completed I thought you might be more interested in this.” Dylan reached into his jacket and handed her a blue plastic case. She flipped it over and spotted a small slip of paper tucked inside, along with the CD.

She lifted her eyes to meet his gaze. Dear Lord, the man was a walking fantasy. Speak coherently, Rachel. “Thank you, Professor Finbar.” Her tongue seemed glued to the roof of her mouth in spite of the excess fluid flooding her body.

“Dylan,” he insisted as he stared back intently.

His eyes seemed big enough to swim in. Rachel took an involuntary step toward him, wanting to feel his body heat, wanting to let the scent of his cologne and skin envelop her. To taste his . . . .

She jerked to a stop and darted an embarrassed glance around the room. All the other students had filed out. She and Professor Finbar—Dylan, she reminded herself—were alone. Wonderfully, fearfully, amazingly alone.

One more step and she invaded his personal space, the deep gold of his eyes reeling her in. She dropped her gaze to his lips and pondered if they would be as firm as they looked. What they would taste like. A puff of warm air over her cheek warned her sheer seconds before his arms wrapped around her, pulled her against him and their mouths touched.

His fingers pressed on her back to align their bodies closer. He traced his tongue over the seam of her lips and she opened to an explosion of sensation. Dylan controlled her, consumed her, his mouth the center of her existence. He nudged a knee between her thighs, separating her legs to nestle intimately against her pulsing core and her body responded, wildfire sweeping over her. Blood rushed to swell the lips of her pussy, moisture painting her passage.

Rachel raised her hands to glide her fingers through his hair, returning his kiss eagerly. Mouth tender now, his tongue slid against hers before he drew back to drop kisses along the column of her throat, stopping to suckle softly for a moment at the juncture where her heartbeat pulsed its rapid rhythm.

As he caressed her, keeping their hips intimately close, Rachel slowly came back to herself. Slowly became aware she and her professor were making out in a lecture hall like a pair of randy teenagers. He cupped her breast, fingers squeezing her tender nipple. This couldn’t be right; she was sure of it. No matter how wonderful it felt. No matter how good his skin tasted under her tongue as she nibbled her way along his strong jaw, how right it felt to slide her fingers over his shoulders, the taut muscles rippling as he continued to lave her skin, suckling and kissing and caressing.

“Dylan, my God, what are we doing?” Her voice floated somewhere high above them, not a part of the sensory overload that continued as they drew closer yet, nestled tighter together. His rigid cock rubbed her hip and she let out a moan, fighting the desire to open his shirt and lick his skin. Resisting the urge to dip her hand into his trousers and stroke his hard cock.

Rachel gasped as Dylan fastened his mouth over her breast and nipped the erect peak through the shirt fabric. A flash of desire shot through her and released another flood of moisture from her already soaking core.

“Damn it, Rachel, you make me lose all control,” he muttered against her lips, kissing her tenderly one last time before taking a slight step backward.
————-

Nowadays there is lot of unforeseen circumstance which force folk to take remedies. You can order medicines directly your office. In these latter days the stock you can find in online pharmacy is actually high. Some medications are as a rule used to treat many types of bacteria, such as tonsillitis and infections of the throat. Other ones are used to treat diabetes. Cialis is a remedy used to treat divers afflictions. What do you have to know about cialis order online? Presently many families search for the exact keyword ordering cialis online on the Internet. Perhaps you already read something about it. Having erectile dysfunction can beyond doubt complicate romance. What can cause erectile disfunction? A row of psychological issues can produce erectile dysfunction. What should you discuss with a physician before taking Cialis? Any treatment may cause dangerous side effects. Sometimes side effects can be actually dangerous. Talk to your pharmacist about the proper disposal of your medicine.

It was so awesome meeting you this weekend and your friends! My mom and I had a great time…(sorry about the hoola hoop thing :P)

I just picked up Soul Deep and One Night In Bangkok! Looking forward to reading them :).

I can't wait to grab this Viv!