Who doesn’t love a sexy cowboy desperate for a second chance? Get your copy of ROCKY MOUNTAIN ROMANCE to read one. 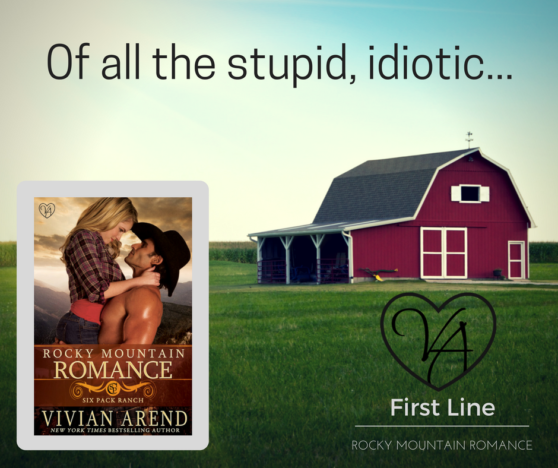 Of all the stupid, idiotic…

Melody Langley stared at the warning light taunting her from her dashboard and cursed the reckless urge that had prompted her to take the back route into Rocky Mountain House.

It was the only reasonable explanation why she’d left the main highway, and instead of driving straight to the veterinary clinic where they were expecting her, she’d pointed her poor, abused Ford onto washboard gravel.

The good part was there should be not a lick of rust left on her undercarriage.

The bad parts? The orange warning light blazing like an evil Cyclops’ eye, plus the temperature gauge shooting higher by the minute, heading into the danger zone at a rapid pace.

“Come on, baby. Ten more minutes, and you can take a break.”

She patted the dashboard in encouragement, laughing in spite of her concern, when a wet nose poked her in the back of the arm as Lady sniffed in curiosity.

Melody moved her hand over the dog’s small head, pausing to rub behind her soft ears for a moment in reassurance. “No, this time you can’t do anything to help. You sit and be a good girl.”

The elderly Bichon settled on its haunches, nestling into the small space left open on the passenger seat.

A loud pop rang out, followed by the engine stuttering for a moment, and Melody jerked her full attention forward, both hands back on the wheel as she made her way down the narrow gravel road running parallel to familiar land. In the fields beside her, the first couple lines of cut hay lay in long, extended rows, while a slow-moving tractor dragging a disc-mower was briefly silhouetted against the distant Rocky Mountains.

Coleman land. She was some kind of a fool to have wanted a glimpse. Although—maybe it wasn’t foolishness. Maybe it was wisdom to prepare for the first time she ran into Steve.

Not like he’d broken her heart or anything, but if she was prepared, maybe she wouldn’t have quite as strong an urge to punch in his pretty face when their paths crossed.

Punch him or jump him, because as crazy as their baggage was, she still wished things had worked out differently between them.

The rattle under the hood grew louder, the temperature gauge buried in the red, and Melody debated the wisdom of pushing her truck to finish the last part of the journey.

The decision was made for her as another firecracker-like sound snapped, the wheel shaking under her hands right before the engine died altogether. Melody swore and threw open her door, stepping onto the gravel. She paused and grabbed a rag from under the driver’s seat before stomping forward to work the hood release.

Even through the fabric, the heat scalded her fingers, and she’d barely gotten the hood open before a third explosion snapped in her face. She fell to her knees, narrowly escaping a scalding burst of steam that shot overhead. Steam that turned to black and coiled upward like a cry for help.

She scrambled to vertical, circling back to the driver’s door, desperate to grab Lady in case things got dicier. A low rumble pulled her attention to the field beside her, a tractor jerking to a stop on the other side of the barbed-wire fence. There was no time to look—just an impression in her peripheral vision of a jean-clad man dropping from the cab to the field.