Do you love books about a widower who gets a second chance at love, with a man who is one of her best friends? Then be sure to pick up LET IT RIDE! 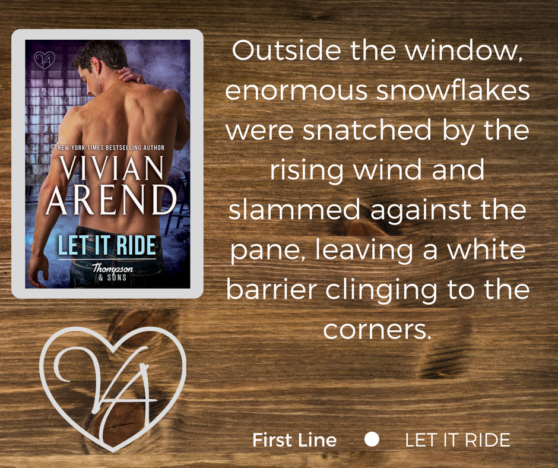 Outside the window, enormous snowflakes were snatched by the rising wind and slammed against the pane, leaving a white barrier clinging to the corners. It was pretty, but prettier still because inside the auto shop where she stood it was warm, the scent of rubber and oil strangely cathartic. Combined with the masculine voices in the background, Maggie was at peace and relaxed.

It was a good way to start her holiday.

She turned from the window as the sound of laughter, deep and familiar, rumbled over her. Her husband Cameron stood next to Clay Thompson, the two of them grinning over some shared joke.

Rocky Mountain House had been home years ago. She had so many good memories of growing up in the small town that when her family had moved to Montana after she graduated, she’d always intended to return some day. Coming back to make a home with Cameron in the foothills of the Alberta Rocky Mountains seemed right.

Clay Thompson had been around back then, although never more than a friend. At one point she’d thought maybe they were ready to head down a different road, but life had changed, and they’d grown apart instead of together. Yet as she admired the two solid examples of manhood before her, there was nothing but contentment in her soul.

Her husband dragged a hand through his blond hair as he spoke, biceps flexing under the sturdy cotton shirt he wore. Clay leaned back on the counter behind him, folding rock-solid arms in front of him as he looked down from his massive height, changing the topic as Maggie approached. “You guys should probably hit the road. The weather’s not getting any better.”

Maggie slipped her hands around Cameron’s arm, smiling up at Clay. “As soon as we’re past Airdrie, the roads should be clear.”

“And there’s no way I’m going to miss my mother-in-law’s cooking. It’s worth however long the drive,” Cameron said.

“You know it,” Cameron agreed. “Best thing that ever happened, marrying someone with family in Montana.”

Maggie squeezed his arm before releasing him so he could pull on his thick winter coat. “Clay’s right—we’d better get going.”

“Your car is completely checked over,” Clay assured her.

“He put in extra hours to get us ready on time,” Cameron shared before accepting Clay’s hand and shaking it firmly. “Appreciate it. The next time we play pool, drinks are on me.”

Clay chuckled. “Drinks are always on you since the loser buys.”

The two guys scuffled for a moment, pounding each other on the back the way guys do as Maggie looked on with amusement.

Then Clay offered her a hug, and she stepped into his arms and squeezed him tight. “Tell your sister I’ll be in touch once we get back in a week,” she reminded him.

“Katy will be waiting,” Clay promised. His strong embrace surrounded her briefly before a firm pat on the back directed her straight into Cameron’s arms. “Drive safe, and I’ll see you both when you get home.”

Her husband backed the car out of the Thompson and Son’s garage and into the wild weather. Maggie adjusted her seatbelt, glancing out the window at the driving snow. It was coming down so heavily she couldn’t see more than the closest shop windows on Main Street.

As soon as he was on the road, Cameron grabbed her hand. “I’m glad we moved to Rocky Mountain House. It’s a good place, with good people.”

She smiled at him, catching his eye during the brief moment he glanced away from the road. “After four months, it already feels like home.”

All of his attention returned to the road ahead of him. “You know what feels like home? Having things to look forward to, like getting back to work with the guys at the station, or—”

“Or going out drinking and playing pool with the Thompson boys?” she teased.

He squeezed her fingers. “Only when you can’t play with me. Because you’re always my first choice for favourite thing to do in my spare time.”

Whenever he said things like that, she fell in love all over again. “Sweet talker.”

“Always and forever,” she answered back automatically, a smile lifting her lips. The ritual begun during their time dating hadn’t lost any of its charm, not even after being together for eight years, and married for four of them. She turned to stare into the whiteness of the blizzard. “I know something else you’re looking forward to. Turkey addict.”

“Yup, I like having two Thanksgivings.” He pressed his lips to her knuckles before releasing her hand. “Besides, it reminds me I’ve got an awful lot to be thankful for.”

Cameron slipped into the slow line of traffic headed toward the main highway that would take them south. Maggie focused on the faintly visible red taillights ahead of them as she fell silent to let him concentrate on the road.

Counting the moments until the weather improved and the trip was over.