Who doesn’t love a wolfie in a kilt?? 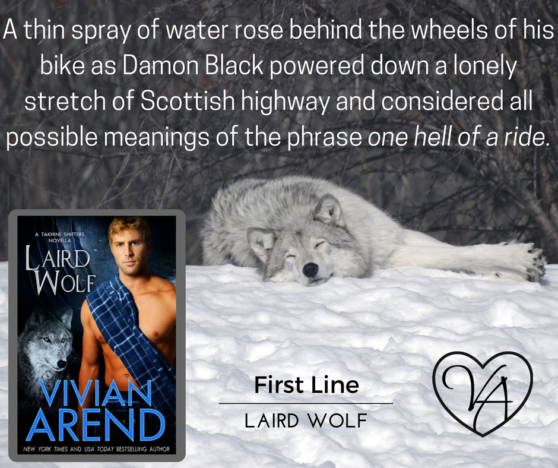 A thin spray of water rose behind the wheels of his bike as Damon Black powered down a lonely stretch of Scottish highway and considered all possible meanings of the phrase one hell of a ride.

The second wave of the storm rumbled louder than the pathetic engine under him, thunderclouds roiling overhead like some National Geographic feature played at high speed. As he closed in on the imposing Sterling-Wylde Manor, it looked as if his shitty luck was going to continue.

His last-minute flight from New York to Inverness had turned into a redeye after being delayed on the tarmac for six hours, putting him into the Scottish airport at five a.m. The classic custom bike he’d booked wasn’t there for some reason, and he’d snatched up the only thing they had on the lot. The best Damon could say about his mode of transportation was it had two wheels and an engine not powered by hamsters.

Still, with a sense of urgency driving him, instead of wasting time, he’d headed into the middle of nowhere on his rescue mission. The first rain shower had gotten him wet, but the highway had been well maintained, and he’d pushed on. Now with the sky turning cobalt and shots of silver reflecting off the surface of the distant lake, Damon figured he was about to be completely drenched.

The road was no longer smooth, and he swerved to avoid massive potholes, his teeth chattering as his entire body vibrated. Mud lifted off the bumpy asphalt, sticking to him as the wind blew in violently from the north. Only the heat of his shifter body kept him from going into hypothermia.

He put his head down and ignored the rolling Scottish landscape, which under better circumstances might have registered as pretty. All he wanted was to get to his destination and make sure Addie MacShay was safe.

This is what friendship meant. It meant he was headed into the middle of bloody nowhere in northern Scotland to rescue the best friend of his best friend’s wife. He’d never met the woman, but here he was, jetlagged and hungry, and if he wasn’t mistaken, three seconds away from swimming in his clothes.

Damon curled up tighter behind the handlebars and increased his speed to maximum, screaming around the sharp curves leading toward what was admittedly an impressive estate. Whatever had brought Addie to this godforsaken place, the people had money.

He adjusted his mindset a few moments later as he passed through the gated entranceway. One side of the massive rock wall held its twisted iron gate in position, albeit rusted and worn, but the other side lay toppled in the grass. An octopus of bent metal reached skyward.

The faint drizzle increased in volume, and Damon cursed harder. He was going to show up looking like a vagabond no matter what he did.

As if trying to increase his level of misery, the back tire on his lame beast of a bike chose that instant to blow, sending the motorcycle skidding from under him. He bounced over the cracked asphalt and onto the grass, momentum propelling him like a rock from a slingshot as he rolled out of control over the torn-up lawn.

He landed in an inglorious heap, waist deep in a sludge-bottomed fishpond.

Damon sat there for a moment, rain pouring down on his head, his helmet tossed aside to let the fresh water wash away some of the duckweed. Strands of hair stuck to his face, and everything from his pants to his boots were filled with water.

His wolf was not amused.

He chuckled. Yup, this trip had been one hell of a ride so far, and he’d barely started.

No luggage—it had decided to go somewhere in India instead of Inverness. According to his research, there was limited if any phone service in the area, which meant if he was in the wrong place it would be hell to get directions, and now here he sat.

At least his day couldn’t get any more fucked up.

Motion from the front door of the enormous edifice pulled his attention to the building towering over him. He couldn’t fault the architecture—his best friend Jim would love to see it. The massive stone bricks that made up the entrance of the keep gave it an old-world flair while the vines curling around masonry softened the imposing castle-like structure.

He hoped to God it had modern plumbing.