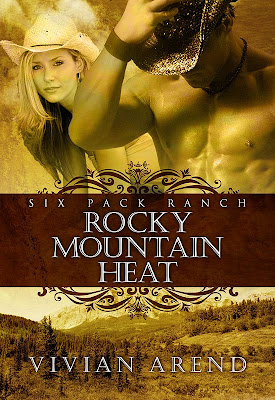 At the Lori Foster weekend, Deb, one of the sweet ladies who hangs out at the Samhain Cafe put together a tote of things to send to another friend Molli who couldn’t make it. The package just arrived. I promised I’d show people what’s on the cover of the T-shirt I sent. It’s the beautiful work of April Martinez from the Liquid Silver art department.

No release date yet, but should be in September. Here’s a link to a bit more about the story and an excerpt.

And I’ll give you a tidbit too , just because I love this story so much!! Blake and Jaxi are HOT together.

Blake rose and made his way downstairs. He stopped and looked at the door of the den, closed tight. Behind those doors Jaxi would be curled up, her blonde hair draped over the pillow, her body nestled in the thick comforter covering the sofa bed. She probably wore one of those baby doll nighties, her long legs exposed, her soft shoulders bare under thin straps of some kind of soft shiny material. Sleeping in the room next to her the first night had been difficult but after a week of spending time with her, his desire for her had grown even stronger.

Blake bit back a growl and headed to his room. His ma needed the help but these few weeks were turning out to be sheer hell on his body. Even now he was harder than a railway spike, the thought of Jaxi close by teasing his senses. He swore the scent of her filtered into his room.

He stripped off his jeans and shirt and padded toward the bathroom door. Oh hell, he’d forgotten he couldn’t go in. As the oldest son he’d taken advantage of picking the room with an attached bathroom. It had a connecting door to the den as well and Jaxi had all her things in there. He stood, his hand on the doorknob. He wanted to enter, hoped by some chance she’d have left the other door open and he could torment himself with a glimpse of paradise.

Blake dragged a breath of air into his lungs in an attempt to cool his burning body. It wasn’t right, he couldn’t think about Jaxi that way. She was a guest in their home and he was as good as a brother to her. He was acting like a hound dog and he should be ashamed of himself.

He grabbed his travel kit from under the bed and instead stepped down the hall toward the large shower room in the annex. He, Matt and Daniel had decided to use the larger bathroom and let Jaxi have the privacy of the other for herself.

The sound of running water met his ears and Blake stepped into the dimly lit room, wondering why his brothers had turned on only half the lights. Splashing noises echoed. Leaving his kit on the sink counter he rounded the corner to the showers.

The three showerheads in the open room were separated by nothing but space. Steam filtered the dim lighting into a moonshine glow.

All he saw was wet, naked skin. Jaxi’s skin. Every inch of her bare to his gaze as the water poured from the middle shower, streaming in waves over her body. She faced away from him, head thrown back as she shifted her body to allow the water to slip over her face and down her chest. Blake, his body hot and needy, watched in a daze as the shampoo rinsed from her hair and undulated down her back, tiny bubbles racing over the curve of her waist. His gaze followed the bubbles along the soft swell of her hips and the full curves of her ass. Her skin was pale pink from the heat of the water, faint tan lines showing on her thighs and arms.

His mouth went completely dry. He had to retreat. He had to turn and leave before she spotted him. He was glued in place as she slid the soap over her body, lifted her hands to brush the hair back from where it clung to her shoulders in white ribbons.

Blake’s cock tented his boxers as Jaxi rotated under the showerhead, turning the front of her body to his sight. Her nipples were soft; tender juicy pink berries crowning full taut curves. The perfect size for filling his hands and still let him take her into his mouth. The water slid in rivulets over her belly and through the pale blonde curls visible at the junction of the long legs he’d fantasized about so many times. Jaxi had her eyes closed and she swayed from side to side as she washed, her hands slipping over her body in a way that made Blake heat to near boiling just from watching her. She hummed, soft and low, her hips moving to the sound of the tune. Guilt shot through him. He had no right to watch her, no right to invade her privacy and treat her like anything but the beautiful caring person he knew her to be. She wasn’t his to admire.

God help him, he wanted her to be.

Nowadays there is lot of unforeseen circumstance which force men to take remedies. You can order medicines directly your office. In these latter days the stock you can find in online pharmacy is actually high. Some medications are as a rule used to treat many types of bacteria, such as tonsillitis and infections of the throat. Other ones are used to treat diabetes. Cialis is a remedy used to treat divers afflictions. What do you have to know about cialis order online? Presently many families search for the exact keyword ordering cialis online on the Internet. Perhaps you already read something about it. Having erectile malfunction can beyond doubt complicate romance. What can cause erectile dysfunction? A row of psychological issues can produce erectile malfunction. What should you discuss with a physician before taking Cialis? Any treatment may cause dangerous side effects. Sometimes side effects can be actually dangerous. Talk to your pharmacist about the proper disposal of your drug.

*Hugs her T-shirt Tight* I'm scared to wear it, its so pretty!
hugs
molli

Ahh, but pretty things are meant to be enjoyed.

Glad you like it Molli. Now I have to get working on the second book so you can get another shirt down the road!

September…Thats too far away.
Gosh, awesome!! That they are already sizzling on the burner!