A Soldier's Christmas Wish is up for Pre-order!

I am so excited to announce that A Soldier’s Christmas Wish is up for pre-order! The second book in the Holidays in Heart Falls will release October 15th. 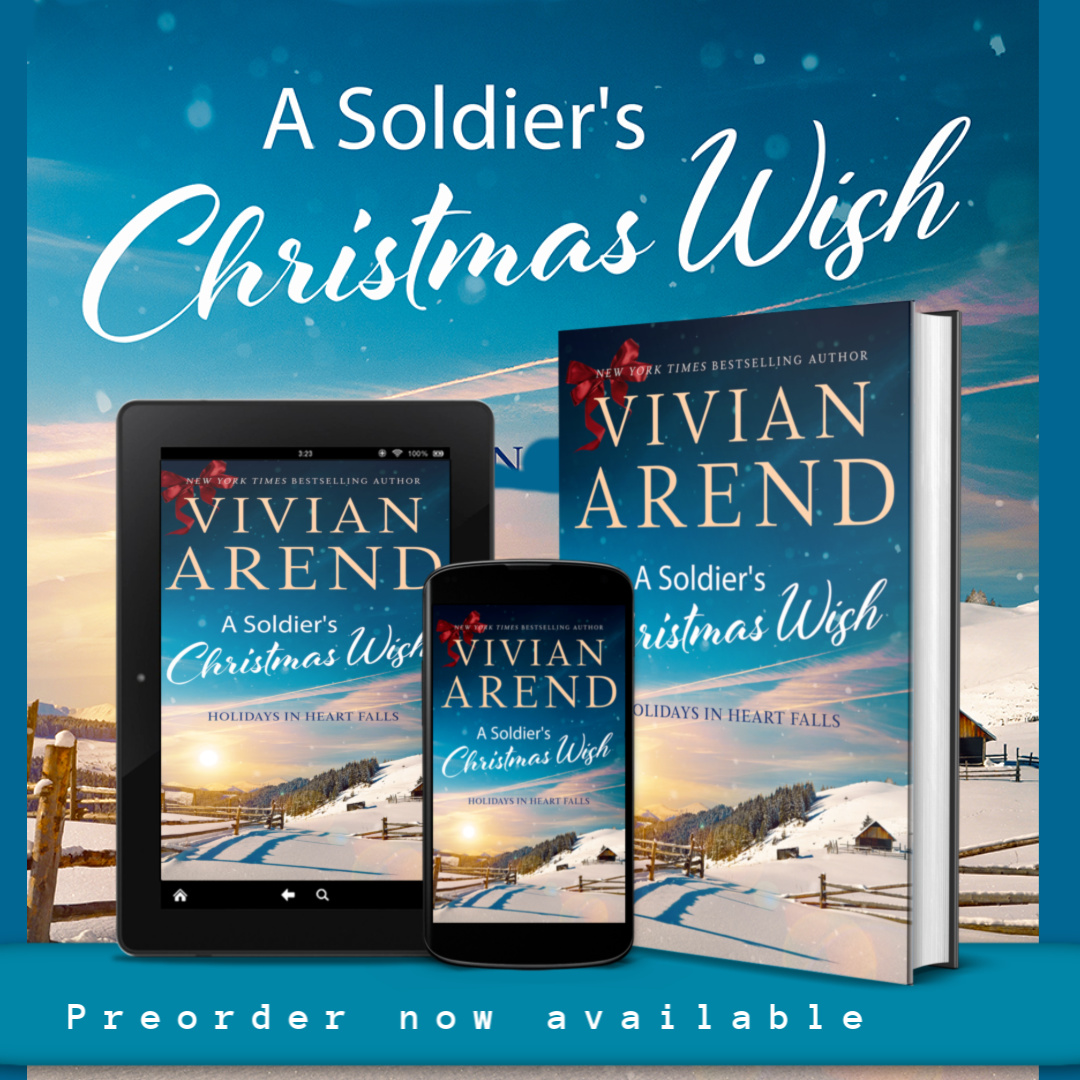 You can pre-order the book now at your favorite retailers:

I’ve got a treat for you. A couple snapshots of what’s been going on during the time since Hanna and Brad fell in love, so you can meet Brooke and Mack a little more.

And get ready for what’s coming next…

Brooke Silver fought to keep her amusement under control as she watched her boyfriend Mack pound on the bathroom door again.

“Brad? You okay in there, dude?” Mack winked at her, and her amusement shifted to something warmer. Hotter.

His dark hair was cut neatly, and with his firm jawline and laughing eyes, Mack Klassen was already temptation personified. Dressed in a suit, he was too damn gorgeous.

The low groan of response from behind the door was slightly more reassuring than the silence they’d gotten the last two times Mack had attempted to pry the groom from where he’d vanished after turning an intriguing shade of green.

It appeared that while Mack’s best friend Brad Ford could face down a fire without blinking, the idea of meeting his barely five-foot bride under the massive arbour constructed in the front yard of the Lone Pine ranch was more than the burly man could handle.

“Hanna is going be standing at the alter waiting for him if he doesn’t hurry up,” Brooke warned.

Mack snickered then pulled himself upright, all seriousness and firm determination, a glimpse of his military background shining through. “If Brad doesn’t get his butt in gear, I have zero problem taking the door off its hinges and hauling him in front of the preacher over my shoulder.”

“You’d look good as a delivery boy, but let’s hope he gets there under his own power.” Brooke took one final satisfying glance up and down his suit be-decked muscular body then smiled approvingly. “Well, I’ll leave you to your entertainment. I need to go make sure the bride isn’t having second thoughts.”

“Tell her I’ve got everything under control,” Mack said.

She hurried down the hallway, her modestly high heels clicking against the wood floor as she made her way to the bedroom where Hanna was doing final preparation for the big moment. Hanna wasn’t planning on running away—she was so in love with her big firefighter it glowed out of her.

Brooke slipped into the bedroom to discover Hanna had moved to a stool low enough her daughter Crissy could poke tiny white flowers into the braid wrapped around her head.

Hanna lifted her gaze but kept motionless. “Everything okay?”

It was the perfect moment for Brooke to lie her ass off. “Everything’s great, and you are beautiful.”

That last part wasn’t a lie. Hanna was a vision, her outfit not quite a white wedding gown, but more than a simple sundress. It was something Hanna said she’d be able to wear over and over to remind her of this day, and Brooke thought that was one of the sweetest things she’d ever heard.

Crissy finished placing the last of the teeny blossoms in her mother’s hair. She stepped back and raised her hand to her mouth, tears filling her eyes. “You look like a princess, Mommy.”

Hanna pulled her daughter into her arms, strategically shutting down what looked to be the onset of tears. “Thank you, sweetie.” She kissed her little girl. “Now let’s go with Brooke so we can finish getting your basket ready. Then we can go outside. It should be almost time to meet your daddy.”

Crissy glanced up at Brooke. “I get to call him Daddy because he loves me.”

“It’s a wonderful thing to have a daddy who loves you,” Brooke responded seriously.

She held out her hand and led Crissy to the kitchen. She took a quick glance down the hallway, thankful to see Mack was no longer lounging outside the bathroom door. It appeared the crisis had been averted.

They finished putting the final few roses in the small silver bucket that Crissy held right before another of their friends opened the door a crack and whispered “It’s time!”

Brooke glanced at Hanna to make sure she was ready.

More than ready from the happiness shining on her face as she held her daughter’s hand and nodded at Brooke.

Brooke led the way to the grassy path where family and friends were gathered under the blooming apple tree. Low chairs rested on either side of the center aisle. Everyone remained seated as Brooke stepped aside and walked around the gathering to join Mack at the edge of the congregation.

Brad waited at the front, right beside the strong tree trunk. His gaze fixed on Hanna and Crissy, his smile showing no indication of his earlier nerves. There was nothing there but anticipation and love.

At Brooke’s side, Mack slipped his hand around hers and held on.

Watching her friend fall in love had been amazing, and now getting to witness her and Brad make a lifetime commitment to each other was extra special.

Standing in witness with Mack at her side—even better. Brooke stole a glance at him but quickly looked back to where Brad had taken one of Hanna’s hands in his, and they’d turned to face the preacher to make their public vows.

Did she want this for herself? Possibly, but there was no need to rush. If someday she and Mack were ready for more, then the next thing would happen. Brooke was pretty firm believer that everything would work out at the right time—she’d built up enough good karma over the years to let fate take care of her.

Today was for cheering for Brad and Hanna, and little Crissy who had a daddy who loved her. Brooke leaned tighter against Mack’s side and trusted that eventually the future would arrive.

Mack whistled lazily as he wandered out of the sporting goods shop and into the mall. His mission to pick up the required items for the fire hall training sessions was complete. Now he had time to kill until the other guys were done their shopping. He turned the corner and came to a complete halt, his gaze fixed on an enormous picture of Brooke plastered on the wall. Her light brown hair with blonde highlights was tousled beautifully over her shoulders, and she was gazing with adoration at a dark-haired man just visible at the edge of the poster.

His heart rate shot up. He might have been in in the middle of a mission or called out to deal with a fire, the adrenaline rush hit so hard. That was his Brooke—

Upon closer examination it became clear the woman was very similar to but not his girlfriend. It took a little while for the surge of anger and confusion to fade.

It took another moment to gather the courage to admit the reason he felt so unsettled was because Brooke wasn’t supposed to look at another man like that.

They hadn’t officially made their relationship anything more than steady dating, and there were good reasons for that, but he’d known for a while it was time to take the next step. He loved being with her, loved every bit of time they spent together. She made him laugh, and she listened, and the fact that he now stood outside of a jewelry store that was advertising engagement rings modelled by a woman who looked almost exactly like Brooke—

Karma was playing games with him.

He peeled his gaze off the poster and continued down the mall, deliberately pushing aside the moment of jealousy and instead dwelling on the truth he had realized. It was time to do the next thing.

He needed to propose, but it needed to be something beyond just taking her out to dinner and passing her a ring. Even going down on one knee didn’t seem like it was a memorable enough event—

Curses muttered under his breath as he confronted another image of Brooke. A second jewelry store, and another huge promotion featuring a woman who looked enough like her at first glance he could’ve sworn it was her, arms wrapped around another man’s neck.

It wasn’t good that he instantly imagined his hands wrapped around the other man’s neck. Brooke would not appreciate Mack’s caveman thoughts, and he needed to get them under control, stat.

This time he moved a little closer, though. Peered in the window of the shop and glanced at the ring display. It wasn’t the price tags that made him turn away, it was the fact the rings all looked the same.

Pretty, he supposed, and shiny, but none of them good enough for his Brooke.

By the time he’d reached the end of the mall and had two more experiences with coming face to face with engagement rings sales and promotional material that set his blood pounding, Mack had decided that karma was no longer playing nice. She was bound and determined he be prepared to propose.

He was equally determined to stick to his guns. As pretty as the rings were, unless Brooke picked it out from behind the counter herself, he was not about to purchase one of the generic stock.

But the sooner he got out of the mall, the better. Escape the stores, and karma would be temporarily defeated.

His teammates returned, and the three of them got back in the truck and headed down the highway, returning to Heart Falls.

“Shoot—Mack, can you pull over by the hardware store there?” Alex pointed off the side of the main road. “Forgot I needed to pick up a few things for Silver Stone.”

While the other two men disappeared into the hardware store, Mack drifted into the thrift shop next door. It was a smaller size place, one of those community-based and family-run shops. The long-haired gentleman behind the till smiled encouragingly as Mack found some used T-shirts to wear when he had dirty tasks to do around the fire hall.

He was paying for his purchases when karma, that determined bitch, decided to take absolute control of his life.

What came next was an experience that he looked forward to sharing with Brooke—after he’d proposed and she’d said yes.

Because, beyond any logic or reason, karma won.

As he stood outside the building and stared down at the ring resting in his palm—the ring he’d purchased because it was absolutely perfect for Brooke—all he knew for certain was that sometime in the next while he had one important task.

Find the most memorable way possible to ask Brooke to be his forever.