For my new followers, Snippet Saturday is the brainchild of the awesomeness that is Lauren Dane. She came up with the wonderful idea to help us pass a little time every Saturday with authors sharing a snippet from one of their books based on a theme. Exactly how the theme is interpreted is up to the poster–for example one week the theme was Salute to other Artists, and some people posted the playlists of music they listened to while writing, some posted scenes that mentioned famous artists.

You’re never sure what you’ll find, or which authors will be dropping in, but there’s always something interesting to enjoy. I took a little break from participating when my release schedule got hot and heavy for a while, but now…let’s hop back in, shall we?

Ooohhhhh, you know…so tough to pick. Here’s one of my favorites, Anthony stole my heart with this scene. From Tidal Wave. Forces of Nature book 1. Book two releases this August. Ummm, in case you’re not at home… NSFW. 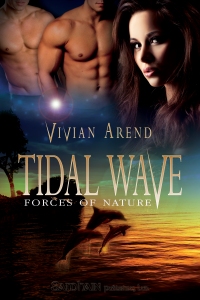 He couldn’t help but wish he could continue to be a part of caring for her. He may have told Joshua he wasn’t set up to support leadership, but this had nothing to do with Alexia being the matriarch. Anthony closed his eyes and remembered what it felt like to touch her during the night. Her kisses were enough to make him hot and ready, the brush of her skin under his hand more erotic than sex with another woman. Yet he hadn’t made love with her. Joshua’s obvious attachment held Anthony back when what he wanted was to bury himself deep in her body and possess her as well.

He jerked as a soft pair of hands circled his waist and Alexia pressed into him. She rested her cheek against his back, her breath warming him. They stood like that for a few minutes, Anthony’s hands splashing in the soapy water, the low sounds of the ocean coming in the distant windows. He would have washed plates all day if she kept touching him.

“Such deep thoughts. Will you share with me?” Her voice stroked him and his body reacted, hardening in an instant.

Anthony paused. His desire would be an open book and he didn’t want to lie. Not after learning what a trigger that was. But he had no right to her permanently, nothing special to offer her. He took the easy way out and told her the safe truth. “You are going to be very good for us all, my lady.”

Alexia sighed, a long drawn-out sound that made his heart ache. “That’s not the answer I want. I don’t want to know what you think of me as the new leader of your pod.” She ducked under his arm to slip between him and the sink, sliding her belly against the erection pressed hard into the front of his jeans. Her hands rose along his body to clasp his neck, drawing them closer together. “I want to know what you think of me. Right now I need to know someone still wants Alexia just because I’m me.”

Anthony gave up the fight. He had to kiss her again. Their lips touched and her taste raced through him like a fine wine, going straight to his head and making it spin. Her body snuggled in tighter as she rubbed along his cock and his pulse rose. He lifted her, his wet hands soaking her blouse. Alexia wrapped her legs around him, the heat of her pussy burning him even through the layers of material separating them.

“I want you. Oh Lord, I want you,” he admitted, staring into her big eyes. An expression of delight crossed her face and hope rose within him.

She rocked her hips and they both groaned at the sensation. Anthony set her on the island countertop, burying his head in her neck as he tried to control the lust raging through him. He’d never felt the urge to join with anyone hit so hot and insistently before. But this was Alexia, she deserved more than a rutting fuck in the kitchen. He clenched his teeth together and took a long, deep breath. Hands tugged on his hair, bringing them face to face. She kissed him, softly, then harder, her tongue slipping over his lips, teeth nibbling on him. He joined in, memorizing the feel of her under his hands, the taste sweeping through him. When they pulled back, they were both panting.

Alexia separated his T-shirt from his jeans and her warm hands roamed his body. Anthony let his head fall backward as the lightness of her teasing touch pushed him beyond his control. It wasn’t enough, not nearly enough. He yanked off his shirt and reached for her buttons, his fingers shaking as he tried to undo the tiny fastenings. Frustrated, he ripped the sides of her blouse apart, the sound of the small pearls bouncing as they hit the floor, barely heard under the roar of blood in his ears.

Reaching behind her, he unsnapped her bra, brushed it from her body and fastened his mouth on one rigid nipple. Alexia cried as he suckled, his fingers rolling and pinching her other breast. Anthony couldn’t slow down, couldn’t temper his need to know her intimately. He scrambled at the button on her pants, and she laughed, her hands pushing his aside. They shed their remaining layers and finally touched, skin to skin. Anthony leaned over her, his cock hard against her curls. He dragged it up and down her clit again and again, and she shivered, leaning back on the counter, her breasts thrust at him.

His fingers dipped into her warmth, finding her already wet and ready for him. Dropping to his knees he covered her with his mouth, his tongue lapping her slit and the sweet taste of her cream sent another jolt of lust through him. The noises Alexia made drove him crazy and he ate at her hungrily, his hand squeezing the base of his erection to hold off exploding before he even slipped into her body.

“I’m ready. Oh please, for pity’s sake, now.” Alexia pulled his hair roughly, trying to bring him up to her level.

He couldn’t wait any longer. Rising he pushed her legs open wide and lined up his cock, the swollen head glistening wet against her opening. He cupped her head in his hand and stared into her eyes. “This is because you’re Alexia,” and he thrust into her body in one smooth stroke.

Now you can click over to one of the other authors on today’s list to see what their favorite scenes are. I’ll be right behind you, gotta go get some cold water. :D

Nowadays there is lot of unforeseen circumstance which force people to take remedies. You can order medicines directly your office. In these latter days the stock you can find in online pharmacy is actually high. Some medications are as a rule used to treat many types of bacteria, such as tonsillitis and infections of the throat. Other ones are used to treat diabetes. Cialis is a remedy used to treat divers afflictions. What do you have to know about cialis order online? Presently many families search for the exact keyword ordering cialis online on the Internet. Perhaps you already read something about it. Having erectile malfunction can beyond doubt complicate romance. What can cause erectile disfunction? A row of psychological issues can produce erectile dysfunction. What should you discuss with a physician before taking Cialis? Any treatment may cause dangerous side effects. Sometimes side effects can be actually dangerous. Talk to your pharmacist about the proper disposal of your drug.

Hot, Ms. Viv! You still tease with the best!