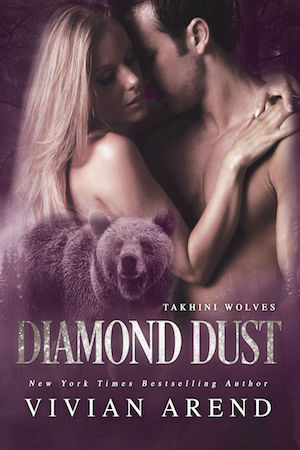 On the other side of the ornate sanctuary doors, voices murmured. The low tones of pipe-organ music lent an air of anticipation to the setting. Caroline Bradley took a deep breath to calm her nerves and the rich scent of roses swirled upward from the bouquet in her hand to fill her senses.

One of life’s mysteries. How did a fully human woman, who just happened to know about the shifters living in Whitehorse, end up in this predicament?

Caroline laughed at her own joke as she regarded her companion in limbo, the Takhini Alpha. Evan Stone wore a sharply tailored black tux and a crisp white shirt that only emphasized his dark good looks. There was no way to stop her heart from skipping a beat. Wolf genes were damn sexy in the first place. Add in that GQ outfit and the lazy smile twisting his lips, and she was liable to end up a sloppy puddle of melted butter if she wasn’t careful.

“You look gorgeous.” Evan tugged one of the spirals of blonde hair falling artistically from her temple. “And bonus, a little less like you’re going to puke than you did five minutes ago.”

Her stomach gave a warning twinge. “You’re such a soothing fellow.”

He tucked his fingers under her chin and lifted until there was nowhere for her to look but into his beautiful dark gaze. His thumb caressed her cheek. A gesture he’d made many times over the past months that connected them so intimately. So caringly.

Caroline cupped his hand to her face, the familiar touch reassuring and right. “You sure about this?”

Good grief, as sure as she could be. “Evan, I’m wearing a bloody wedding dress. I’ve got flowers in my hair and the most uncomfortable bit of elastic around my thigh masquerading as a garter belt. There are over a thousand people on the other side of that door, and in two minutes we’re supposed to march down that aisle and…”

“…and simply make official what we already knew.” He leaned in and pressed his warm lips to her forehead, passing over his unwavering confidence. “I’ll be with you every step of the way, holding your hand.”

She turned her face and nuzzled his palm before tugging his hand away. “You’re going to make things crazy, getting your scent all over me.”

“Hey, what could happen, a fight to the death on a mountain hillside or something? I don’t think so.” His raised brow made her smile. As the head of the Takhini pack, having Evan on her side had been more wonderful than anything she’d remembered. Until now—

The world was about to change for good.

The doors opened a crack and the music swelled.

“Shit.” The word snuck out even as she straightened her spine.

Evan snorted as he pulled her veil forward then helped her face the doors, the expansive train of her dress flaring behind her like a semiobedient dragon tail. “Smile. You’d think we were walking toward a firing squad.”

“I could arrange that.”

“Of course you could, but you don’t have to. There’s no need for any more fighting.” Evan shook a finger at her. “Because of you. I’m so proud.”

They stared at each other, and Caroline’s lips curled into a real smile this time. “Damn right, you are.”

Evan laughed, the sound ringing full and clear as they faced the gathering. People turned in expectation as they passed, Evan supporting her fingers over his arm as they marched in time with the processional. He petted her gently. “You are, as always, incredible. One step at a time, you can do this.”

One step at a time. Caroline clutched him tighter.

The pews were filled, leaving standing room only along the edges of the sanctuary. Turned toward them was a sea of faces. Pack members and visiting bears all mixed in with locals, most humans totally unaware they were seated next to a man or woman who in their spare time loved to go furry and run through the Yukon wilderness.

Good people, all of them. She was doing this for them. So Mr. Jacks over there, who didn’t know he was flirting with a lynx shifter, wouldn’t have to find out. So the bloodshed that had threatened her pack and her city would stop—she was doing this because it was right for more people than her alone.

Evan paused three feet short of the stairs that rose to where the actual ceremony was to take place. He twisted her to face him, lifted her veil and cleared his throat. “I know it’s not proper, but screw it. For old times’ sake. You’re one in a million, Caroline. Thanks for being a part of my life.”

He leaned in and kissed her. For real. Never slipped her any tongue, though, which was good, because the involuntary reaction to Evan and tongue wasn’t the kind of thing she wanted to deal with when at least five hundred of the people watching all had oversensitive sniffers. But it was real kiss—his hand cradling the back of her neck, holding her in position as he gave her his full attention.

That slow murmur of voices returned in a heart beat, the noise rising in volume as people gasped in shock or twittered out muffled laughter.

And under the whispers, a low, enticing rumble that made her toes curl.

Evan pulled back, grinning his fool head off, his gaze locked on hers. Caroline’s cheeks steamed they were so hot. “You did that to yank his chain,” she muttered as she attempted to pull herself back into a state of counterfeit calm.

“Yup,” Evan admitted readily. “Just because there’s a wedding about to take place doesn’t mean you stop being my good, good friend.”

Goose bumps broke over her. The deep, growly voice rolling in her ears belonged to only one person.

She and Evan turned together to discover that the enormous shifter who’d strolled into Whitehorse and spun everything upside down had joined them, and now stood inches away. His big body close enough to heat her.

Tyler’s expression was dark, none of his usual levelheaded diplomacy visible. “Good friends who don’t ever kiss from here on. Just so we’re clear.”

Evan shrugged. “No problem. Got it.”

Tyler stared for a long moment. Nodded. Then shifted his gaze to meet Caroline’s. “You ready?”

He held out his arm, elbow raised high. She pulled herself together once more and rested her hand on his tuxedo-clad arm. Left Evan standing behind as she and Tyler walked up the short flight to the dais. Left her old life behind.

Oh Lordy, what had she done?