Excerpt: The Wind & The Sun 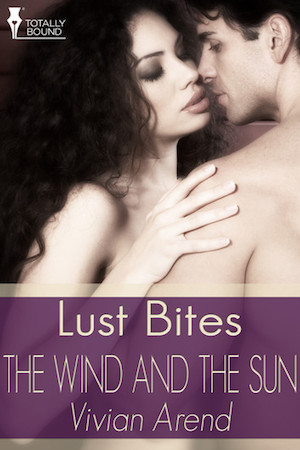 The Wind and the Sun were disputing.

It was a constant battle. They had begun while still youngsters because it was tradition for their families to feud about everything.

The argument returned again to the original contest of strength the Sun had won. Well, strictly speaking, it was the current Sun’s grandfather who beat the current Wind’s grandmother, the position being inherited…

“You can’t possibly think the record should still stand. When you read the stories it’s very clear your grandfather cheated.”

“Cheated? Pop-pop? I don’t think so. You’ve just got a bad case of fable envy and that’s why you insist on reading conspiracy theories and convoluted twists into the very clear records.” Sunshine flashed a smile at Zephyr as she flipped her long blonde curls over one shoulder. She leaned back in her recliner and took another sip of her Serengeti Smoothie. Her long tanned legs stretched in front of her, glistening from the thin layer of baby oil she’d applied minutes ago. She wore her favourite pale apricot sundress. It not only fit her extremely well but she’d once seen Zephyr walk into a pole when she walked past him wearing this particular dress.

He was fun to tease.

Sunshine flicked another glance at him. He towered over her, his feet spread wide as he glared at her. He ruined the total domination look by shifting to the side with an uneasy hitch to reduce his discomfort as his jeans visibly tightened.

She reached over and placed her drink on the small table beside her chair, being careful to lean as far as possible to the other side before she released the glass. The move should make her dress ride up another few inches, perhaps give him a flash of her pale yellow lace panties.

Except, oops, she wore a thong. It wasn’t possible to flash panties, just cheeks.

With a slow and deliberate motion, Sunshine sat back and grasped the bottom of her skirt. She gave a couple of tugs to wiggle it into place then with a casual glance, looked back up. She started at his toes, and by the time she’d reached his crotch, she knew she’d been successful.

The jeans had gotten tighter than before. Poor boy. He really was so much fun to tease. It was her absolutely favourite pastime.

“Why don’t you sit, Zephyr? You’re giving me a headache twisting my neck looking at you. Sit or go away.” Sunshine lifted her arms to place her hands behind her head, elbows wide, closed her eyes and pretended to relax. She took a deep breath and sighed in contentment.

Of course she knew deep breathing while her arms were raised produced a nice swell of her bosom to the top of the already low-cut neckline, but that was a mere coincidence.

It was hard not to let a little smirk show on her face. Hmm, let’s see. Three points?

There was a rattle as Zephyr dragged a chair next to her. A soft rustling noise followed and she caught herself before she opened her eyes to see what he was doing.

She didn’t care except she liked to make sure he suffered torments of all sorts. It was a matter of pride to make the mighty Wind family suffer. They were the most annoying, the most irritating of all the families. Her mother, Dazzle, told her the secret was to find the proper way to torment them. Mom had a running battle pitched with Zephyr’s Mom that involved showing up in public places wearing the same outfit Mistral just purchased. Of course Dazzle would manage to wear the outfit a couple days before Mistral made an appearance. The constant media coverage all pointed out the obvious copycat tendencies of the Wind family in their attempts to reflect a little in the glow of the Bright family’s exquisite taste.

Since Zephyr had little interest in a clothes competition, Sunshine had tried for years to come up with an appropriate method of sparring. The heat-up-the-bike-seat trick and the melting-ice-cream-into-puddles trick gained little more than rolled eyes.

She’d begun to despair of being able to maintain the family pride until they became teenagers. That was when Sunshine discovered she suddenly had the ultimate battle weapon.

Backup artillery—other portions of her anatomy.

Zephyr was now so outclassed in the competition Sunshine almost felt sorry for him at times. But only ‘at times’ and only ‘almost’, because, damn, it was good to be the Queen of the Hill.

The rustling sound stopped and there was the flick of a bottle opening beside her. She smiled. She had him drinking his sorrows away.

Score Four, but who was counting?

“What do you think about a rematch?”

Sunshine lifted one brow and turned to face him. She wanted to hit him with the full look of disdain she’d been practicing in front of her mirror.

Did she mention naked?

Holy Sahara, the boy had gone mad. He’d dropped every last stitch from his body and slathered himself in oil before reclining like a Greek god on his couch. He rested on one elbow, his upper body flexing arms that would make Hercules a happy man. Firm muscles swelled under the skin of his chest, and Sunshine’s fingers actually twitched with the need to press her palms against him to see if he was as solid as he looked. The ridges of his abs defined a beautiful six-pack, no eight, no… Hell, was it possible to have a twelve-pack? She couldn’t be sure because she was…kind of distracted…from concentrating on counting…because a trail of intriguing curls led down to where one leg stretched out, one bent in a perfect frame around…

Well, let’s just say someone was happy to see her.

Heat, like she usually only produced on extreme summer days, flushed over her skin and she took an involuntary lick over suddenly dry lips.

A wicked chuckle distracted her from her sightseeing excursion.

Holy Zeus on a stick, what did she think about what? Sunshine forced her mouth shut and hurried to wipe the drool from her chin, trying to make it look like she had covered a yawn.

Yeah, right. A yawn. Only because the total oxygen level in her body had dropped to negative twenty in thirty seconds or less. If she didn’t take in some air, she would pass out.

Come on girl, pull it together. This was war.

“I’m sorry, were you talking to me? I expected the cabana boy with a refill sometime soon. It’s impossible to get good service anymore.” Sunshine plucked a fan out of midair and waved it in front of her neckline. She wanted to produce a bucket of ice but that would have been a little obvious.

He was gorgeous. Why had she never noticed before?

“You know, maybe you’re right. I mean, your grandfather did win the contest as it was established.”

Zephyr rolled to his back. Sunshine gulped and turned away to grab her drink. Anything to stop from looking at that flagpole rising bold as brass into the sky declaring, “Zephyrland—rides available.”

“I said he won the contest as it was established. Personally, I think my grandmother was in the first stages of cyclone fever when she agreed to the terms. I mean, come on…”

Oh, not a good choice of words.

“…getting a guy to remove his cloak to prove who is stronger? Maybe Gramma was a few sheets to the wind, I heard she drank on occasion. Anyway…” Zephyr sat abruptly, swinging his legs between their chairs. His…attributes…were hidden by the bend of his body and Sunshine felt the loss.

“I’ll admit your ancestor won. Still, I think it’s time for another challenge to see who is stronger now.” His voice was quiet and cool. It smoothed over her skin like a caress.

It made her shiver.

“What, you want to arm wrestle? That’s really fair.” Sunshine sat as well. Just because it was time to sit. Not because the view was better or anything.

Zephyr chuckled, a low sexy rumble that hit her hard and deep. “Oh no, not a physical challenge. At least, not physical that way.”

His thigh rubbed against hers, creating icy fingers zapping up her skin towards her womb. Sunshine closed her eyes for a moment to concentrate. She didn’t want any accidental bush fires on the African plains again. She took a close look at him for the first time in a long time. Zephyr’s straight brown locks hung to his shoulders instead of his usual military crew cut. A couple of errant strands fell in front of his eyes and she reached without thinking to brush them back. Her fingers tingled as she touched him and she bit back a moan.

“What are you suggesting?” she asked. She swallowed hard as his gaze traced over her body, dark brown eyes with flecks of gold around the iris. “What kind of rules?”

“Strength can be defined as being the most powerful. If someone is powerful, they can rule or dictate and people have to obey. I think the most powerful things are not those forced upon you, but what you want to do again and again. Your grandfather said ‘Kindness affects more than severity.’ He was right in his challenge. For our challenge, however, I want it said ‘Desire affects more than force.’”

He laid a soft hand on her thigh and slid his palm over her skin like a cool breeze on a summer day. In an instant, every nerve in her body went on high alert. Small circles traced by his fingertips slipped along her inner thigh then sadly back towards her knee.

“I challenge you to a contest of strength, Sunshine. Bright family against Wind family. You can use any trick in your repertoire and I can access all the emotions of the wind. At the end of the challenge, we will see what kind of desire rises to the top.

“The person who created that desire will be named the victor.”

Sunshine leaned closer, angling her body to be sure he saw down her cleavage. She had to get back in the game. She’d lost ground big time in the past couple of minutes.

“We throw rays and gusts at each other?  Let’s be clear on the attack method.”

Zephyr ignored her chest and reached for her hand instead. He brought it to his mouth and gave her palm a soft kiss before answering in his dark chocolate voice. “You know what I’m talking about, Sunshine. Fooling around, making out, getting down and dirty. Foreplay for hours. Then sex. I have nothing scheduled for a few days my assistants can’t take care of. I suggest we find a nice location and prepare for the challenge.”

Sunshine hesitated. Not that she was afraid or anything, but it was close to harvest season in the prairies and she’d hate to be distracted and cause—

Zephyr lowered her hand to his lap and wrapped her fingers around his erect cock. His very hard, hot and thick cock.

Zephyr leaned close, his mouth a whisper away from hers. “So, we are agreed. Let the competition begin.”

« Return to The Wind & The Sun