We’re back to Silver Stone!

After spending time in Rocky Mountain House helping her sister Dare with her newborn twins, Ginny Stone is returning home, which means it’s time we all went for another visit as well.

There’s new, wonderful adventures in store for the Stones, including you get to finally meet Tucker Stewart. Yes, Ashton Stewart’s nephew is also returning…Tucker spent most of his summers on the ranch when he was young, and he and Luke were pretty much best friends. Tucker was the perfect age for Ginny to develop a mad crush on him. Which eventually led to some other interesting history between them…

You’ll have to read A RANCHER’S LOVE to find out more! 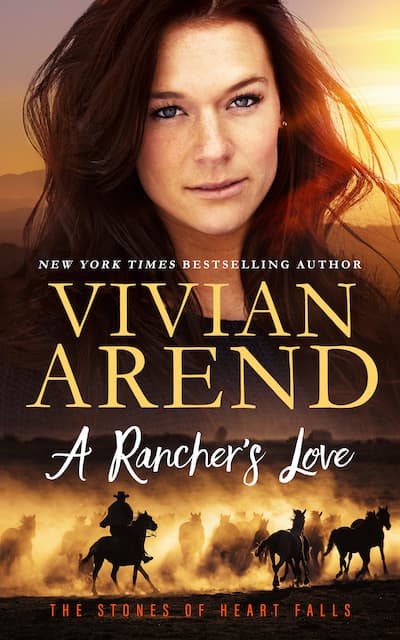 Return to Silver Stone, where the legacy of love is ready to bloom again.

Ginny Stone wants to be a vital part of her family’s ranching success, but nothing is the same as it was three years ago, and now she’s not sure where she fits in. To add to her troubles, her big brother’s best friend has shown up—the sexy lover Ginny’s been keeping secret for years.

During idyllic childhood summers, Tucker Stewart visited with his uncle, made friends with the Stone children, and slowly learned how to become a valuable part of Silver Stone ranch. Tragedy derailed his plans once, but when his uncle hints at retirement, Tucker’s opportunity to take over as foreman is suddenly back on the table. Which means finally getting a chance at forever with the seductive and elusive Ginny as well.

With both Tucker and Ginny feeling the need to show their worth, it’s only natural they team up. Operation Prove It is now in play, and the stakes are more than a paycheque. Nothing less than their hearts are on the line.

What we now know…

Only, here’s a fun thing for you. I write in a straight, linear line frame, and you all know there’s been a gap of time since the end of A Rancher’s Bride (Luke & Kelli) and now. Which is fine, but I do like to hint at the end of book 3 what’s coming in book 4… Which I absolutely did not know until recently. Lol.

I’ve now written the “teaser” for book 3, and I’ll be adding it to A Rancher’s Bride. If you have your books set to update, it should automatically show up there. (Including on your audio book—once the back room updates!)

But for fun, I’m putting it here as well so you get a taste of what’s to come in August!

Christmas Eve, just over one and a half years later

Ginny Stone was finally home. And that home, Silver Stone ranch, was bedlam.

She’d arrived just in time for dinner and found the house full to the brim. Which was perfect, in a way. She didn’t want any bells and whistles made over her arrival and with so many people milling about, both friends and family, there was no chance one of her older brothers would attempt to haul her into a deep conversation about long-term goals before she’d had a chance to get her head on straight.

The loud and joyous meal was followed by time with her nieces as they enthusiastically caught her up on everything they’d done over the past month since her last brief visit. When she finally convinced them to fall asleep, Ginny joined the rest of the grownups still in the house and helped get the tree in place and decorated, with presents tucked underneath for the surprise of Christmas morning.

The only down-side of the evening was being informed that her usual room in the basement was already taken. In fact, all the usual places were occupied.

Tamara was very apologetic about it, but had a solution. “Would you mind crashing in one of the horse trailers? The one next to the south barn is clean, and there are bedsheets in there.” She made a face. “I’m not sure if anyone got around to actually making the bed, though.”

“I can handle that,” Ginny promised. She laid a hand on her sister-in-law’s arm. “It’s okay. I’m family. You don’t need to guest me up.”

Tamara wrapped her in a big hug. “I’m very much looking forward to getting to know you better.”

“Me too,” Ginny said honestly. “Plus, we need to reminisce in Caleb’s presence about how you took him to the ground the first time you met.”

The burst of laughter from Tamara was heartfelt, and Ginny’s optimism returned. Maybe this coming back to the family fold would be easier than she’d hoped.

But she was glad to be able to slip away a few minutes later. Away from the rumble of laughter and the sheer presence of people, and back into the quiet of the winter night. Ginny grabbed her backpack from her truck and wandered slowly, taking in all the visible changes to the place she’d grown up but been away from for years.

The trailer Tamara had sent her to sleep in was a newer one, parked neatly beside the south barn. The three goats in their nearby pen watched her with wild curiosity, and Ginny saluted as she passed. “As you were, fellow mischief-makers.”

She opened and closed the trailer door as quietly as possible. No use in letting the goats know they had neighbours, or the hellions would find a way to break out and come haunt her in the night.

The trailer smelled strangely good. She’d expected the air to be slightly stale, so the unusual scent was both a relief and a mystery. Bergamot? Coffee? Those two for sure, but something else familiar that she vaguely remembered…

Tired enough to simply want to crash, Ginny stopped in the small living space to get ready. She stripped off her pants, removed her bra from under her top, leaving only her oversized tank to sleep in.

“Be free,” she mumbled softly, taking a deep breath and enjoying the lack of pressure on her shoulders from the bra straps. Big boobs were a pain at times, literally. “I crack me up.”

Her eyes had adjusted to the pale glow coming in the window from the yard light, so she didn’t bother with turning on the overhead light. She shuffled toward the bedroom area, suddenly wary when a strange, out-of-place sound rumbled her direction.

Ginny cautiously peered around the corner.

The bed indeed had sheets as Tamara had told her, but they were messed up, scrunched into semi piles over the long muscular form of a man. He was face down, his butt on prime display. The edge of fear that had swept in vanished.

Lying before her was Tucker Stewart, nephew to Silver Stone’s long-time foreman, her older brother Luke’s companion in crime during the summers while they were growing up, and her own personal kryptonite.

What she should do was back away and find somewhere else to sleep.

What she did was stand motionless for far, far too long, simply staring.

Time had only made him more delicious. His face was mostly scrunched into the pillow, but his lips were visible. Strong and full, they were parted slightly, a soft rumble only an uncharitable person would describe as a snore escaping him.

She didn’t need to see his eyes to remember the pale blue shade. Didn’t need to see him awake to be able to recall his all too brief smiles, always accompanied by a spark in his eyes, as if he were astonished that she’d pulled an expression from him other than his usual gruff visage.

Triceps defined even in sleep, his visible forearm was dusted with a faint layer of light brown hair. His big hand pressed to the mattress where his strong fingers were splayed as if ready to cup her breast.

His big, talented hands. Ones Ginny had enjoyed feeling him run all over her. Broad shoulders that she’d dug her nails into as they’d shot together toward a sweaty, dirty, overwhelmingly pleasurable peak.

The curve of his hip teased her, one thigh pulled up to protect more delicate body parts. The hollow of shadow that hid his groin made her smile and lift her focus to the star of the show. His ass, the sheet shoved far enough aside to showcase every muscular dip and the straight row of dots scarring his right butt cheek.

Which is how she’d recognized him. Ahem.

She’d not only enjoyed seeing his naked ass up close and personal before, but she’d been there when her older brother Luke had given Tucker that scar. Twelve years old and pretending they were hosting a magical duel, Tucker had reacted to Luke’s spell with determination, throwing himself backward only to unknowingly land full force on a rake.

He was no longer that youngster. Nor the teenager whom she’d followed after like a love-struck puppy. Not even the serious young man who she’d finally convinced she was grown up enough to know what she wanted—which included wild, vigorous sex with him.

Long lean lines, bare skin she wanted to touch. She must have made a noise because he woke. His body tightened, which did wonderful things to his ass.

He rolled. Ginny forced her gaze off the tempting bits—parts. That was not a bit—coming into prime display, shifting to meet his eyes.

Tucker blinked, then blinked again, as a dark smolder twisted into place.